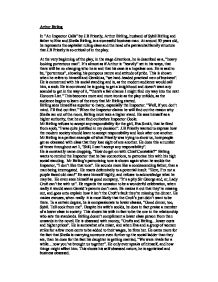 Arthur Birling In "An Inspector Calls" by J.B Priestly, Arthur Birling, husband of Sybil Birling and father to Eric and Sheila Birling, is a successful business man. At around 50 years old, he represents the capitalist ruling class and the head of a patriarchal family structure that J.B Priestly is so critical of in the play. At the very beginning of the play, in the stage directions, he is described as a, "heavy looking portentous man". It's almost as if Arthur is "heavily" set in his ways, that there will be no changing who he is and that his case is a hopeless one. He is said to be, "portentous", showing his pompous nature and attitude of pride. This is shown when he refers to himself and Gerald as, "we hard-headed practical men of business". He is concerned with his social standing and is, as the modern audience would call him, a snob. ...read more.

Mr Birling is a perfect example of what Priestly was trying to show us, how people get so obsessed with class that they lose sight of one another. He does this a number of times throughout act 1, "Still, I can't accept any responsibility". He is constantly name dropping, "How do get on with Chief Constable?" Birling wants to remind the Inspector that he has connections, to patronise him with his high social standing. Mr Birling's patronising tone is shown again when he scolds the Inspector, "I don't like that tone". He sounds more like a condescending father, than a man being interrogated. He reacts defensively to a potential insult. "Here, I'm not a purple faced old man!" He sees himself highly, and refuses to acknowledge what he may be. He even sees himself as good company, "It's a pity Sir George and, er, Lady Croft can't be with us". ...read more.

He only ever speaks of himself, and how things might affect him. This shows his self obsessed nature, he is egotistical and business obsessed. He is impatient and irritable, "(after a pause, with a touch of impatience)". In fact, as the play goes on, Birling gets more and more angry with the inspector. This hints at his guilt, as when the Inspector informs him that he is investigating everyone, Birling relaxes and apologises, "(with marked change of tone)". He jumps to the conclusion that Eva had been fired from Milwards because of poor work, "Not doing her work properly?" Little does he know that in fact, it was his daughter's fault she was fired. He seems to believe that all lower class people working in upper class businesses must in fact be bad workers. This stereotyping shows how the upper classes saw workers in those days. ...read more.

This essay amounts to not much more than a set of notes - brief observations of Mr Birling are each supported by a suitable quotation and a short comment. There is little discernible structure and no development. There are also no overall conclusions drawn. As such, the observations are quite acute and the quotations used provide good support. The material could be used to provide the basis of a good essay.

Paragraph structure has little logic but sentence construction is mostly well controlled and grammatical, using a good range of lexis.