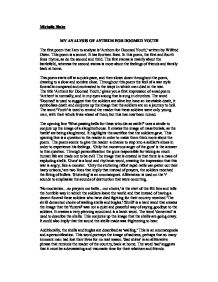 MY ANALYSIS OF ANTHEM FOR DOOMED YOUTH

Michelle Blake MY ANALYSIS OF ANTHEM FOR DOOMED YOUTH The first poem that I am to analyse is 'Anthem for Doomed Youth,' written by Wilfred Owen. This poem is a sonnet. It has fourteen lines. In this poem, the first and fourth lines rhyme, as do the second and third. The first stanza is mainly about the battlefield, whereas the second stanza is more about the feelings of friends and family back at home. This poem starts off at a quick pace, and then slows down throughout the poem, drawing to a slow and sombre close. Throughout this poem the feel of a war style funeral is compared and contrasted to the ways in which men died in the war. The title 'Anthem for Doomed Youth,' gives you a first impression of a sad poem. 'Anthem' is normally, and in my eyes a song that is sung in churches. The word 'Doomed' is used to suggest that the soldiers are alive but have an inevitable death, it symbolises death and conjures up the image that the soldiers are on a journey to hell. The word 'Youth' is used to remind the reader that these soldiers were only young men, with their whole lives ahead of them, but this has now been ruined. ...read more.

Additionally, the shells and bugles are described as 'wailing.' This is an onomatopoeia and a personification. This word portrays the image of sadness, perhaps that so many innocent men had lost their lives for no real reason. 'Sad shires' is an alliterative phrase that reminds the reader of the country, back at home. The word 'sad' suggests that it must be a devastating and traumatic time for their relatives and friends. The next stanza begins with a rhetorical question to drive home how stupid the war was. 'What candles may be held to speed them all?' creates the impression that the soldiers are moving on to their next life. The response is 'Not in the hands of boys but in their eyes,' implying that instead of a candle that would be lit at a traditional funeral to symbolise everlasting life, these soldiers received tears in the eyes of boys. The image I received from this is the misting up of boys' eyes and tears that are being shed. This image is very sad and depressing. 'Shall shine the holy glimmers of goodbyes,' suggests that the relatives eyes are very meaningful as they see the dead soldiers off to their next lives. ...read more.

All the wars that go on over the years and even now must be of a very similar nature. The war against Iraq and the many many soldiers that have all ready lost their lives to wars. These soildiers must have experienced what the soldiers in this poem experienced. Nothing has really changed. You cannot disquise the noises that they hear, gun shot is gun shot and I feel that cannot be tamed down. Seeing people getting killed, it must be of the same experience. So yes, my preference is the charge of the light brigade, at least they got decent funerals compared to the soldiers in anthem for doomed youth. In conclusion, I felt that Wilfred Owen captures the reality of the war in this very moving poem. By emphasising the number of deaths of the innocent he outlines the severity of the war. And I like the fact that because of his first hand experience, he wrote what this in a way that no other could, he wrote what he saw before him, in the eyes of his fellow men and soldiers. He showed people that war was not at all glamorous like many pre twentieth century war poets had made it out to be. Wilfred Owen brought to light the truth. He was talking from his own experience so his poems have more of an impact. ...read more.