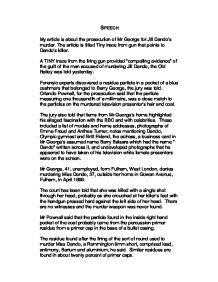 My article is about the prosecution of Mr George for Jill Dando's murder. The article is titled Tiny trace from gun that points to Dando's killer.

SPEECH My article is about the prosecution of Mr George for Jill Dando's murder. The article is titled Tiny trace from gun that points to Dando's killer. A TINY trace from the firing gun provided "compelling evidence" of the guilt of the man accused of murdering Jill Dando, the Old Bailey was told yesterday. Forensic experts discovered a residue particle in a pocket of a blue cashmere that belonged to Barry George, the jury was told. Orlando Pownall, for the prosecution said that the particle measuring one thousandth of a millimetre, was a close match to the particles on the murdered television presenter's hair and coat. The jury also told that items from Mr George's home highlighted his alleged fascination with the BBC and with celebrities. These included a list of models and home addresses, photographs of Emma Freud and Anthea Turner, notes mentioning Dando, Olympic gymnast and Britt Ekland, the actress, a business ...read more.

The residue found after the firing of the sort of round used to murder Miss Dando, a Remmington 9mm short, comprised lead, antimony, Barium and aluminium, he said. Similar residues are found in about twenty percent of primer caps. A forensic expert found that the particle from the coat contained Barium, aluminium and a trace of Lead. The three particles from the hair and the particle from the coat could have originated during the firing of the bullet recovered from the murder scene. Mr Pownall said. He added that the absence of elements such as Magnesium and Sulphur suggested that it was not caused by fireworks, and a test firing of a bullet with a primer cap identical to that in the round that killed Miss Dando produced residue that was "exactly the same" as that in Mr George's coat. ...read more.

Long awaited was this prosecution for the murder of the celebrity Jill Dando. I think it is good that it takes so little to prove the guilty party guilty but in taking so little evidence there must be some errors. It says that the same sort of residue is found in 20 % of other gun residue and therefore must cut it down but is it enough to put a person in prison for life with no gun or witnesses. Also the gun residue could have been from another time as a member of the forensic team said that this residue an stay there in definitely, this means it could be from any of the blank firing replica guns he had. Mr George was said to have been seen hanging around the area. This all could be a series of coincidences but there seems to be too many of them in this case for it to be. ...read more.