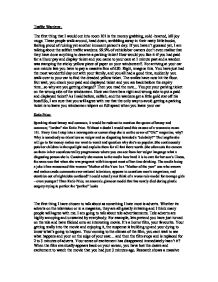 Traffic Wardens:. The first thing that I would out into room 101 is the money grabbing, cold-hearted, kill joy mugs. These people walk around, head down, scribbling away in their nasty little books, feeling proud of ruining yet another innocent person's day. If you haven't guessed yet, I am talking about the selfish traffic wardens. 99.9% of vehicle/car owners don't even realise that they have done anything to deserve a parking ticket! How would you like it if you had paid for a 1hour pay and display ticket and you came to your care at 1 minute past and a warden was stamping the sticky yellow piece of paper on your windscreen?. For arriving at your car one minute late you have to pay a massive fine of �30. Right, imagine this. You have just had the most wonderful day out with your family, and you all had a good time, suddenly you walk over to your car to find the dreaded yellow ticket. The smiles have now hit the floor. ...read more.

She continuously puts her children in the spotlight and exploits them for all that there worth. She often sets the camera on them in her countless reality programmes where you can see from her vulgar language what a disgusting person she is. Constantly she moans to the media how hard it is to care for her son's illness, the same son that when she was pregnant with him spent most of her time drinking. The media being a joke it has announced this woman "Mother of the Year. Is a "Mother of the year" one who swears and makes crude comments over national television, appears in countless men's magazines, and stumbles out of nightclubs confused? I could actually not think of a worse role model for teenage girls - even younger! Than Katie Price, an anorexic glamour model that has nearly died during plastic surgery trying to perfect the "perfect" looks The first thing I have chosen to talk about as something I hate most is adverts. ...read more.

Well, when asking around I've been told that some people wrongly think adverts are useful, saying they use this time either to go to the toilet or make a drink or snack. Well, when counting up the amount of advert breaks in-between an hour-long program I was watching yesterday, there was a massive 4 breaks interrupting it! No way do people need to get up and do these so-called useful things 4 times in an hour, which is every 15 minutes, which is ridiculous! Furthermore, adverts are there simply to advertise different products or services. But, who actually watches the adverts? Definitely not me, and I'm not the only one. A massive 94% of people don't pay any attention to the adverts, and 86% of these people change the channel over whilst the adverts are on. So, adverts, they do nothing but annoy people, they ruin the programs you watch and the advertisements don't get any attention by the vast majority of the population, therefore meaning they aren't doing the job they are there for. They are annoying and pointless, and I am sure everyone will agree they should definitely be put into room 101. ...read more.

Although this answer appears to be written the wrong way around, with the candidate writing in the middle of their answer "The first thing I have chosen to talk about as something I hate most is adverts.", this candidate's answer ...

Although this answer appears to be written the wrong way around, with the candidate writing in the middle of their answer "The first thing I have chosen to talk about as something I hate most is adverts.", this candidate's answer adheres well to what is required of all candidates answering a Writing to Describe task. A common creative writing piece for GCSE is "What you would put in Room 101" and I think I speak for many when I say this candidate has chosen some very worthy contenders for Room 101. I like the way they ideas are expressed although an examiner may argue the narrative voice of the first idea (traffic wardens) is slightly too sardonic to effectively transmit a lot of the humour that is there.

The Level of Description is very good. It is very apparent from all the candidate's descriptions that they have a seething hatred for traffic wardens, Katie "Jordan" Price and TV advertisements. Again, there are little discrepancies that examiners will pick up on and so this reflect in the rating I gave - discrepancies such as the reuse of adjectives which can sometimes give the impression the candidate has limited vocabulary. Other than that, there is an excellent selection of three items that the candidate would banish and they have employed a number of linguistic devices like triples, statistics and powerful language in order to best implement their argument.

The Quality of Written Communication is fine for the most-part, though there are some discrepancies. It should be noted to all candidates for GCSE - especially English Language candidates - that colloquialisms and shorthand is not permitted at any time unless it is being quoted from a source. "Tele" is not the correct way to write "television". Most exam board will permit "TV" but not "tele" and the candidates need to be aware of using the appropriate Standard English at all times in their answers.