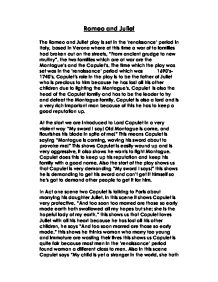 My conclusion is that Capulet loved Juliet so much that he was overprotective and thought of his family before anything else. The only problem that got in the way

Romeo and Juliet The Romeo and Juliet play is set in the 'renaissance' period in Italy, based in Verona where at this time a war of to families had broken out on the streets, "From ancient grudge to new mutiny". the two families which are at war are the Montague's and the Capulet's. The time which the play was set was in the 'renaissance' period which was 1690's-1740's. Capulet's role in the play is to be the father of Juliet who is precious to him because he has lost all his other children due to fighting the Montague's. Capulet is also the head of the Capulet family and has to be the leader to try and defeat the Montague family. Capulet is also a lord and is a very rich important man because of this he has to keep a good reputation up. At the start we are introduced to Lord Capulet in a very violent way "My sword I say! Old Montague is come, and flourishes his blade in spite of me!" This means Capulet is saying "Montague is coming, waving his sword about to provoke me!" This shows Capulet is easily wound up and is very aggressive, it also shows he wants to fight Montague. Capulet does this to keep up his reputation and keep his family with a good name. ...read more.

Both Capulet and Paris agree for the wedding to be held on the Thursday, they didn't want it any sooner because it would have been to close to Tybalt's funeral and because Capulet is image conscious he doesn't want to look heartless. When Capulet tells Paris he can marry Juliet he seems very calm, rash and realistic this is because he his very forward about his decision. When Paris leaves Capulet orders Lady Capulet to go and tell Juliet of the good news and for her to prepare herself for the wedding. This shows Capulet thinks woman will do as they are told and that they are in charge of the children looking after them and getting them ready. It also tells the audience he may not feel comfortable telling his own daughter about the happiness he has made for her but he doesn't know she carnet marry Paris. In act three scene five the main part starts by Juliet's mother saying "Hath sorted out a sudden day of joy," "Marry, my child, early next Thursday morning." this is Lady Capulet telling Juliet she is marrying next Thursday morning . Juliet's reaction to this is "Now by Saint Peter's Church, and Peter too, he shall not make me there a joyful bride." there is also irony in what she says "It shall be Romeo, whom you know I hate." ...read more.

This is Capulet saying change them from happiness to sadness change everything. Here the audience can sympathise with Capulet for losing his daughter and not knowing the plan, or him deserving losing Juliet because of the war between the Capulet's and Montague's. In act five scene three the scene is started by the prince talking about how everyone has been punished from Romeo and Juliet's death. Capulet says "O brother Montague, give me thy hand. This is my daughter's jointure, for no more can I demand." this shows there deaths heal the hate between the two families. He also says "as rich shall Romeo's by his lady's lie, poor sacrifices of our enmity." this is Capulet saying they were wasted and how it was a poor sacrifice because the two families couldn't get along. Capulet and Montague react to Romeo and Juliet's death positively. My conclusion is that Capulet loved Juliet so much that he was overprotective and thought of his family before anything else. The only problem that got in the way was he was scared incase he lost his image like at the Capulet ball if Tybalt did kill Romeo people may of thought Capulet was in with it and though he was low and nasty. But he acted well and thought of the guests before the hate of the Montague's. Juliet was right in keeping her and Romeo a secret because if Capulet did find out I think he would of gone out of his way just to kill Romeo personally. Mark Speirs ?? ?? ?? ?? ...read more.