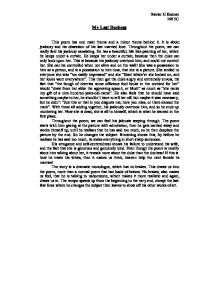 My Last Duchess This poem has one main theme and a minor theme behind it. It is about jealousy and his obsession of his last married love. Throughout the poem, we can really feel his jealousy escalating. He has a beautiful, life like painting of her, which he keeps under a curtain. He keeps her under a curtain, because then the duke can only look upon her. This is because his jealousy overtook him, and could not control her. She can be controlled when not alive and on the wall! ...read more.

He also feels that he should have said something maybe to her, he shouldn't have to tell her off, but maybe it was necessary, but he didn't "Just this or that in you disgusts me; here you miss, or there exceed the mark". With these all adding together, his jealously overtook him, and so he ends up murdering her. Now she is dead, she is all to himself, which is what he wanted in the first place. Throughout the poem, we can feel his jalousie seeping through. The poem starts with him gazing at the picture with admiration, then he gets carried away and works himself up, until he realises that he has said too much, so he then despises the picture by the end. ...read more.

Even though the poem is mostly about him talking about her, it reveals more about the duke than the duchess! If this is how he treats his wives, then it makes us think, heaven help the next female he marries! The story is a dramatic monologue, which has no brakes. This draws us into the poem, more than a normal poem that has loads of brakes. No brakes, also makes us feel, that he is talking to us/someone, which makes it more realistic and again, draws us in. The tempo speeds up from the beginning to the very end, except the last few lines where he changes the subject then leaves to show off his other works of art. Xavier H Keenan 148 5C ...read more.