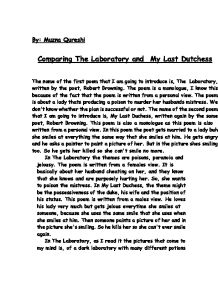 By: Muzna Qureshi Comparing The Laboratory and My Last Dutchess The name of the first poem that I am going to introduce is, The Laboratory, written by the poet, Robert Browning. The poem is a monologue, I know this because of the fact that the poem is written from a personal view. The poem is about a lady thats producing a poison to murder her husbands mistress. We don't know whether the plan is successful or not. The name of the second poem that I am going to introduce is, My Last Duchess, written again by the same poet, Robert Browning. This poem is also a monologue as this poem is also written from a personal view. In this poem the poet gets married to a lady buh she smiles at everything the same way that she smiles at him. He gets angry and he asks a painter to paint a picture of her. But in the picture shes smiling too. So he gets her killed so she can't smile no more. ...read more.

She describes her feelings to a point where you know exactly how she feels as shes doing what shes doing. In My Last Duchess, the pictures that come to mind as i read the poem is. A man looking at the painting of his wife that he just murdered and looking at her smile. You can see the power that the duke uses to kill wife and to control people. In The Laboratory the layout is stanzas, its written out in short paragraphs which are only 4 lines long each. In My Last Duchess the tone used is conversational tone, the language used is functioned to direct, guide and command the listener. The language which is used is quite blunt - he deliberately belittles the things she enjoyed. He refers to the sun setting in plain almost mocking terms when he says: "Dropping of daylight" He refers to her horse as the "mule" which conveniently rhyms with "fool" in line 28. ...read more.

In My Last Duchess the language pattern used is convoluted syntax - use of colons to add important detail to point and next to short abrupt sentences. The sound of the poem and use of words is stratagies of argument/persuasion - quoting other people, or at least speculating on their thoughts - asking rhetorical questions, the poet groups words to achieve a desired effect of the use of enjambment - his thoughts are not completed within one line, instead they carry on to the next lines. The conclusion of The Laboratory is what the poet is trying to communicate with the reader about, and in this poem it would be about the feelings that the poet is feeling while writing the poem. The language he uses is effective because. The conclusion of My Last Duchess is that he used a dramatic monologue and we get the impression that he is someone who is used to speaking at great length, it reflects his arrogance. Repition is used in some words for example; "spot of joy" , "stoop", "thanked" Words like, ''lessoned'' and ''taming'' give us an insight into wat he expected of her. ...read more.