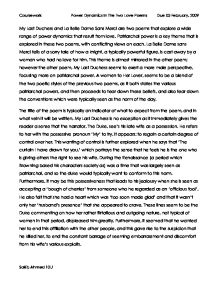 My Last Duchess and La Belle Dame Sans Merci are two poems that explore a wide range of power dynamics that result from love. Patriarchal power is a key theme that is explored in these two poems, with conflicting views on each. La Belle Dame sans Merci tells of a sorry tale of how a knight, a typically powerful figure, is cast away by a woman who had no love for him. This theme is almost mirrored in the other poem; however the other poem, My Last Duchess seems to exert a more male perspective, focusing more on patriarchal power. A women to Her Lover, seems to be a blend of the two poetic styles of the previous two poems, as it both states the various patriarchal powers, and then proceeds to tear down these beliefs, and also tear down the conventions which were typically seen as the norm of the day. The title of the poem is typically an indicator of what to expect from the poem, and in what vein it will be written. My Last Duchess is no exception as it immediately gives the reader a sense that the narrator, The Duke, see's his late wife as a possession. He refers to her with the possessive pronoun 'My' to try, it appears; to regain a certain degree of control over her. This wanting of control is further explored when he says that 'The curtain I have drawn for you,' which portrays the sense that he feels he is the one who is giving others the right to see his wife. ...read more.

This power is quite strong as it is unavoidable, and can have an effect on his love for the woman as he may ponder on the relationship more. However, this is only one power dynamic that may have an effect on his love for the woman, and his overall love outlook. This power is far less prominent in 'My Last Duchess' with the atmosphere merely created through the dramatic monologue. Also, the main atmosphere is created through the ranting of the Duke. A woman's power over a man is not often accredited, however it is brought to light in this poem with the woman who he (the knight) see's as a 'faery's child', or in essence a woman with an abundance of beauty. This power of the woman over him may have resulted in him becoming quite 'haggard' and 'woe-begone' meaning his gradual degrading of state, because of his insistence that 'she did love' him, even though he believes she does, although she never explicitly stated those words, and this is backed up later in the poem when he admits she said it in a 'strange' 'language', which he believed said that she 'love[d]' him, even though it was quite plain to see that she did not in fact love him, but was there to be pleasured. This shows that the woman used her power to manipulate what was the result. However, another power that is used to some extent, is matriarchal power, on a more philosophical sense, as the knight imagines the lady wearing a 'garland' that could be seen as him trying to believe that the 'sacred' woman is still angelic, however, this is contradicted when he describes her as 'wild' and that he could only 'shut her eyes with kisses four'. ...read more.

This is clever because it sticks in the person's mind, and creates a stronger argument. The technique of enjambment is similar to the first poem, where it manages to create a conversational style so as to appear to converse with the other messenger, while realistically the Duke isn't very sociable. However, none of these literary techniques are echoed in the second poem, La Belle Dame Sans Merci, which is probably due to the problem of both being written in completely different styles, with one being a more sorrowful poem, and the other being a more commanding and endearing poem. Conclusively, the three poems all share a variety of power dynamics that are all explored. The most common theme was that of which gender was more dominant and which gender was controlled. This was mostly explored in 'My Last Duchess' and 'A woman to her lover'. Inevitably this led on to the topic of equality, and it is in this way that egalitarian power was brought to light. Even 'La Belle Dame Sans Merci' explored how the woman and the man were both equal as they could both enter and leave the relationship as they did please. However, poetic techniques were used to further enhance the message of the poem; with all the poems using a different poetic technique to enhance and improve it's delivery of different love and power dynamics. In the end, the power of love seemed to encompass all the poems, as all three showed how love took control of the. ?? ?? ?? ?? Coursework Power Dynamics In The Two Love Poems Due 05 February, 2009 Sakib Ahmed 10U ...read more.