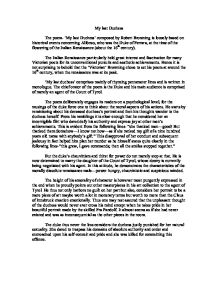 My last Duchess The poem- 'My last Duchess' composed by Robert Browning is loosely based on historical events concerning Alfonso, who was the Duke of Ferrara, at the time of the flowering of the Italian Renaissance (about the 16th century). The Italian Renaissance particularly held great interest and fascination for many Victorian poets for its unconventional pursuits and aesthetic achievements. Hence it is not surprising to behold that the 'Victorian' Browning chose to set his poem at around the 16th century, when the renaissance was at its peak. 'My last duchess' comprises mainly of rhyming pentameter lines and is written in monologue. The chief orator of the poem is the Duke and his main audience is comprised of merely an agent of the Count of Tyrol. ...read more.

This is evident from the following lines- "she thanked men-good! But thanked them Somehow-I know not how-as if she ranked my gift of a nine hundred years old name with anybody's gift." This disapproval of her conduct and subsequent jealousy in fact helped him plan her murder as he himself states quite clearly in the following lines-"this grew, I gave commands; then all the smiles stopped together." But the duke's chauvinism and thirst for power do not merely stop at that. He is now determined to marry the daughter of the Count of Tyrol, whose dowry is currently being negotiated with his agent. In this attitude, he demonstrates the characteristics of the morally dissolute renaissance male-power hungry, chauvinistic and suspicious minded. ...read more.

It almost seems as if she had never existed and was as inconsequential as the other pieces in the room. The duke thus never the less considers the duchess justly punished for her natural sexuality. She dared to trespass his domains of absolute authority and order and encroached upon his self-conceit and pride and she was killed for committing this offence. Browning intended this poem to challenge the norm that had come to be established by the Renaissance. This was evident from the fact that he portrayed the duke as the obvious villain of the tale. This poem also asks a question that must be asked of all art-"does art have a moral component or is it merely an aesthetic exercise? In these latter considerations Browning prefigures writers like Charles Baudelaire and Oscar Wilde. ...read more.