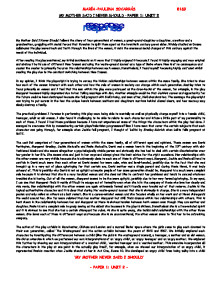 My Mother Said I Never Should - response.

MY MOTHER SAID I NEVER SHOULD - PAPER 1: UNIT 2 My Mother Said I Never Should follows the story of four generations of women, a great-grand-daughter a daughter, a mother and a grandmother, grappling with social forces that threaten to split them apart as the twentieth century grows older. Widely studied on Drama syllabuses the play moves back and forth through the lives of the women, it sets the enormous social changes of this century against the needs of the individual. After reading the play mentioned, my initial sentiments on it were that I highly enjoyed it because I found it highly engaging and very original and abstract by its use of different time frames and using the 'waste-ground scenes' as a type of limbo where time is of no consequence and causes the reader to primarily focus on the relationships between each woman. Nonetheless, I found myself becoming highly confused whilst reading the play due to the constant switching between time frames. In my opinion, I think the playwright is trying to convey the hidden relationships between women within the same family. She tries to show how each of the women interact with each other and how the role of women in society can change within each generation. Keatley tries to focus primarily on women and I feel that the men within the play were portrayed as the draw-backs of the women, for example, in the play Margaret becomes highly depressed due to her failing marriage with Ken. Another example would be that Jackie's career and opportunity for the future could've been destroyed because she fell pregnant with Neil's baby, and soon after, Neil abandons her. The message the playwright was trying to put across is the how the unique bonds between mothers and daughters survives behind closed doors, and how secrecy may slowly destroy a family. The practical problems I foresaw in performing this play were being able to mentally as well as physically change myself into a female child, teenager, adult or old woman. ...read more.

My voice in the performance was used to portray a phoney playful type of accent. I spoke clearly and projected my voice in order for the audience to hear every single word I was saying and for them to grasp my concept not only through my movement but I wanted them to hear what I was trying to aim for. I spoke at a slow pace to create more tension between my words to add to the build up of climactic rigidity. I had a tendency to use silences and pauses to add to this build up of tension to also keep the audience engaged into what we were trying to achieve. I used an average pitched voice to show how hard Margaret herself was trying to make the atmosphere as normal as possible even though she is only making it worse. I chose to use my voice in this way because it truly shows how hard Margaret was trying to not lose control and it also gave an uneasy atmosphere to the performance in general. Pace, silence, pause and pitch are all extremely important in communicating a message to an audience because they communicate what emotions are going through someone's mind and they then communicate it to the audience. They portray what kind of frame of mind a role has, for example if a character is depressed or disheartened, he or she would use a dull tone of voice, and speak at a very slow tempo and leaving lots of pauses and silences. Facial expression and gestures are also extremely important in communicated a message to an audience because it gives almost the same effect as pace, silence, pause and pitch, except of course, without use of sound. If a performance was either mimed or a still-image you would not need to use pace, silence, pause and pitch because you would just have to share your idea using a facial expression and a gesture, in other words you are still showing the audience what your character is feeling without the need of telling them. ...read more.

This contrast between both boys through costume was shown throughout the entire play. Lighting was used throughout the play to symbolise moods or location. In the first act, the lighting is dull and drab to show the atmosphere of a slummy Liverpool. In the second act, brighter lighting is used when the Johnstone's move to the countryside as a symbol of new hope and a new start in life. When Mickey becomes depressed, blue lighting is used because blue is often associated with depression; 'feeling blue'. When Mrs. Lyons threatens Mrs. Johnstone, red lighting is used to suggest anger or hatred in this conflict between them. Large shadows are made with lighting during the final scene during Mickey's rage to show that he has because a monster, something different to how he was before. The most vivid prop that I remember throughout the entire play would be the locket given to Eddie when he was seven, from Mrs Johnstone, after Eddie announced that he was leaving. The locket contained a picture of Eddie as well as a picture of Mrs. Johnstone. Mrs. Johnstone gave him this locket so that he would always remember Mickey but secretly, he wanted him to have the picture of her even though he would never find out the truth. When Mrs. Lyons finds out about Eddie obtaining this locket, she becomes furious and then she finds out that the Johnstone's moved to the country straight after the Lyons' did. Mrs. Lyons tracked Mrs. Johnstone down and accuses Mrs. Johnstone of following her and she then attempts to kill Mrs. Johnstone in an insane rage. All in all I thought this play to be a very clever, deep moving performance, conveying many different issues and aspects of people's lives. I really enjoyed it and I was moved by the way the play made me think about how many more chances we have in life if we were upper class and had money and power. MAR�A-PAULINA SOCARR�S 8169 'MY MOTHER NEVER SAID I SHOULD' - PAPER 1: UNIT 2 - ...read more.