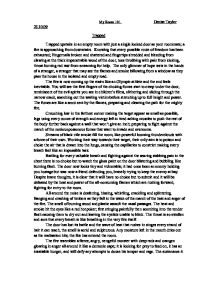 My Room 101 Denise Taylor 23.10.09 Trapped Trapped upstairs in an empty room with just a single locked door as your roommate; a fire is approaching from downstairs. Knowing that every possible route of freedom has been exhausted; Fingernails broken and shattered and fingertips shredded and bleeding from clawing at the thick impenetrable wood of the door, toes throbbing with pain from kicking, throat burning red raw from screaming for help. The only glimmer of hope rests in the hands of a stranger, a stranger that may see the flames and smoke billowing from a window as they pass the house in the isolated and empty road. The fire is now coming up the stairs like an Olympic athlete and the end feels inevitable. ...read more.

Working their way towards their target, their only aim is to poison and choke the air that is drawn into the lungs, causing the capillaries to constrict making every breath feel like an impossible task. Battling for every valuable breath and fighting against the searing stabbing pain in the chest there is no choice but to watch the gloss paint on the door blistering and bubbling like burning flesh. The door now looks tiny and vulnerable; it had once been an enemy holding you hostage but was now a friend defending you, bravely trying to keep the enemy at bay. Despite brave thoughts, it is clear that it will have no choice but to submit and it will be defeated by the heat and power of the all-consuming flames which are rushing forward, fighting for entry to the room. ...read more.

The fire resembles a fierce, angry, vengeful monster with deep reds and oranges glowing in anger all around it like a demonic cape; it is looking for prey to feed on, it has an insatiable hunger, and will defy any attempts to douse his temper and rage. The sustenance it craves and searches for will allow its very heart and soul to re-energise and increase in size before marching onwards; bigger and more powerful than before. -2- Denise Taylor 23.10.09 There is no going back now; the glimmer of hope that a stranger will call for help has now diminished and is replaced by the acceptance of being consumed by the fire. The fragile tired human body is no match for the strength and energy of this ferocious enemy. That was my Room 101 and the thought alone terrifies me to the core, causing my stomach to twist into knots, my mouth to dry out and my pulse to race. ...read more.

This is a Writing to Describe task, and is based on George Orwell's creation "Room 101" from his novel 'Nineteen Eighty-Four'. The candidate displays a good description of what their idea of Room 101 would be using a number of ...

This is a Writing to Describe task, and is based on George Orwell's creation "Room 101" from his novel 'Nineteen Eighty-Four'. The candidate displays a good description of what their idea of Room 101 would be using a number of literary devices and there is a good image of the terror that consumes it's victim consistent throughout the piece. I particularly like the reference that the fire is like an army or soldier that is evident, and this kind of consistent personification is what examiners love to see as it shows that their has been care not to simply throw in any old adjective or adverb and construct a coherent description of someone's biggest fear approaching them.

The Level of Description is very good, and there is a constant image in the readers heads about the gradual approaching of the fire. There is an excellent use of personification to describe the fire as an advancing enemy army and this works well because the malicious intent of a swarm of soldiers makes a good comparison to the menacing flames. The use of metaphors and similes also paint a vivid picture in the readers' minds.
What I like best about this answer is the lack of personalisation. The answer is not written in First or Third Person narrative. Instead, where it addresses anyone, it addresses the readers themselves and directly puts them in the position of the fire and the locked room at the top of the house. This kind of descriptive tactic is extremely effective and putting the reader at considerable emotional unease when reading the story, and works wonders for the candidate's mark.

The Quality of Written Communication is fine. There are moments where the syntax becomes clunky due to an overload of adjectives in one sentence, so perhaps a little too much emphasis on description can cause a loss of cohesion, but this is no big issues; none of the words used are used erroneously, and this shows examiners that the candidate possesses a very wide knowledge of a range of challenging vocabulary.