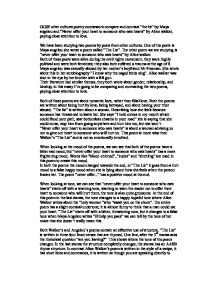 GCSE other cultures poetry coursework compare and contrast "the lie" by Maya angelou and "Never offer your heart to someone who eats hearts" by Alice walker, paying close attention to love. We have been studying two poems by poets from other cultures. One of the poets is Maya angelou she wrote a poem called "The Lie". The other poem we are studying is "never offer your heart to someone who eats hearts" by Alice walker. Both of these poets were alive during the civil rights movement, they were highly political and were both feminists; they also both suffered a trauma at the age of 8. Maya angelou was s******y abused by her mother's boyfriend Mr Freeman. She wrote about this in her autobiography "I know why the caged birds sing". Alice walker was shot in the eye by her brother with a BB gun. Their literature had similar themes, they both wrote about gender, relationship, and kinship, in this essay I'm going to be comparing and contrasting the two poems, paying close attention to love. Both of these poems are about romantic love, rather than filial love. Both the poems are written about being hurt by love, being betrayed, and about having your trust abused. ...read more.

"The Lie" is written in three four lined verses that are rhymed. One line, after the 3rd stanza asks the rhetorical question "are you leaving?" This shows where the tone of the poem changes. In the last stanza the structure completely changes, the stanza has an AABB rhyme structure. In contrast Alice Walker's poem is written in the style of a recipe, it has short lines and commands, it is written as though you are speaking directly to Walker. The entire poem is unrhymed. The word "delicious" is written in italics like in a recipe, the italics enhance the way "delicious" is used in a sinister way. Tension builds up all the way through the poem but break to a calm tone at the end. There is comparison to be found when analysing the language of the poems. Both poems use negative verbs such as "hold", "threaten","sear","tearing" the use of these verbs shows how much she would like to hurt him. Walker's poem also uses negative verbs to show how much the man doesn't care that he is hurting walker's heart. Unlike in "The Lie", "never offer your heart.." contains sibilance, when walker writes "send it shuttling from side to side" the repetition of s makes the words sound sinister and evil and like you can hear the mans saliva in his mouth. ...read more.

In "The Lie" there is no rhyme until the last stanza where angelou rhymes "late" with "date" this is visual rhyme when "gone" is rhymed with "telephone", this half rhyme shows how broken angelou is. In "never offer..." Half rhyme is also used in the last stanza this adds a happy upbeat feel this fits in with the idea of women there to help in Africa. The rhythm in "The Lie" starts off slow and lots of commas are used, this makes the poem seem scary, but when it reaches the last stanza the rhythm is also slow, and the use of run on lines adds to the sinister tone. In conclusion, it is evident that both poems are similar in the way that they are both written about love in a sinister way. The poems are different in that "The Lie" is written en an angry and upset mood, the word "today" is used, this showed how recent the poem was written after she was heart broken, However, in comparison the other poem "never offer your heart.." is written more about men in general as oppose to one particular man like in "The Lie". My own personal preference is "The Lie" because I liked how emotional it is, but how there is a sudden change of mood at the end. ...read more.