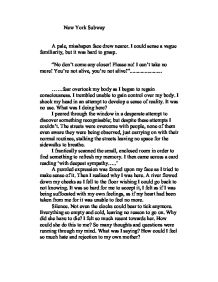 New York Subway A pale, misshapen face drew nearer. I could sense a vague familiarity, but it was hard to grasp. "No don't come any closer! Please no! I can't take no more! You're not alive, you're not alive!"........................ ......fear overtook my body as I began to regain consciousness. I trembled unable to gain control over my body. I shook my head in an attempt to develop a sense of reality. It was no use. What was I doing here? I peered through the window in a desperate attempt to discover something recognisable; but despite these attempts I couldn't. The streets were overcome with people, none of them even aware they were being observed, just carrying on with their normal routines, stalking the streets leaving no space for the sidewalks to breathe. I frantically scanned the small, enclosed room in order to find something to refresh my memory. I then came across a card reading 'with deepest sympathy.....' A puzzled expression was forced upon my face as I tried to make sense of it. Then I realised why I was here. A river flowed down my cheeks as I fell to the floor wishing I could go back to not knowing. ...read more.

I stepped out onto the sidewalk to be barged into, everyone rushing to get somewhere, not caring about anyone else. I looked up at the sky to discover tall, large buildings towering over me in an ominous way. I felt so alone yet I was surrounded by hundreds of people. I carried on walking down the sidewalk admiring the homeless, not their lifestyles but their outlook on life. They don't care about what anyone else thinks, only about the necessities. Although in their eyes I could see despair, this is not right, what was the world coming to? These menacing thoughts could not be rid of. They just kept tormenting my mind. Then I saw the answer, it was written in large bold letters entitled 'Broadway subway.' There had been many stories about taking the subway but I didn't suppose any of them was true, besides it's cheap and it's the only way. I stepped down into a dark, dingy hole of darkness below on the earth's surface. A distinguished stench roamed the air making me feel nauseous. I went down the stairwell cautiously taking in the hell-like atmosphere. As I reached the bottom I gasped in horror at the threatening surroundings. ...read more.

Panic. I couldn't bear to go through all this again. I decided to get off at the next platform and then get directions from there. I quickly rose and stepped off the train to find myself surrounded by emptiness. My hopes had been demolished once again. Everything came flooding back and I finally broke down. I could no longer hold in all these feelings. Tears burst from my eyes and I didn't have the strength to wipe them away. It was then a hand touched my shoulder. A shiver went down my spine as I turned around in fear. A man was stood behind me, he smiled calmly. "What's wrong?" He said I didn't want got get into everything so I just told him that I was lost and I needed to get out of the subway. He showed me to the stairwell and gave me directions. A sense of relief passed through me. Was it finally it? Was I really here? The only thing that was left to frighten me was the thought of going back. But I realised now that there was nothing to fear except being left alone with my thoughts, but maybe if I confronted them then there would be nothing left to fear; except perhaps, fear itself! ...read more.