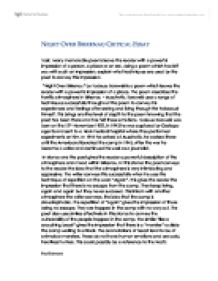 NIGHT OVER BIRKENAU CRITICAL ESSAY Task: Many memorable poems leave the reader with a powerful impression of a person, a place or an era. Using a poem which has left you with such an impression, explain what techniques are used by the poet to convey this impression. "Night Over Birkenau" by Tadeusz Borowski is a poem which leaves the reader with a powerful impression of a place. The poem describes the horrific atmosphere in Birkenau - Auschwitz. Borowski uses a range of techniques successfully throughout the poem to convey his experiences and feelings after seeing and living through the holocaust himself. This brings another level of depth to the poem knowing that the poet has been there and has felt these emotions. Tadeusz Borowski was born on the 12th November 1922, in 1943 he was captured by Gestapo agents and sent to a n**i medical hospital where they performed experiments on him. In 1944 he arrived at Auschwitz, he worked there until the Americans liberated the camp in 1945. After the war he became a writer and continued his work as a journalist. In stanza one the poet gives the reader a powerful description of the atmosphere and mood within Birkenau. ...read more.

In this stanza also the poet starts the idea that the people in the camp felt abandoned and forgotten. This is shown when the poet says: "blue orion - lost amongst the stars" Blue orion is a very bright constellation of stars. They are so bright in fact it's hard to miss when you look into the sky in the right area. This bright constellation was the last hope for many of these people. This symbolised God. Even though they were being put through this they could still rely on God to stay with them. Now, for them, in the battle to keep their faith it has been lost amongst all the other stars. This distinctive constellation was what set them apart from the rest and kept them strong. Now that this is gone they have nothing left to cling to. In this poem we see the poet reliving his experiences in Birkenau. The poet relives his experiences from Birkenau mainly in his dreams. We see this when the poet says: "It's steamy, stifling. Sleep is a stone" This has many references in it one of which could be attributed to how he now finds it difficult to sleep. ...read more.

His sub-conscious brings back to him all of the things that in everyday life he can block out and ignore. In his dreams he cannot. For him sleep is doing the exact opposite of what it should do. In the next line the poet says : "Like God's judgement on the corpse of the earth fog descends over Birkenau" This gives the reader the impression that the poet believes that God is allowing this to happen. When the poet goes on to talk about the fog descending we get the impression that God is trying to cover up this camp. Even he cannot bear to watch what is happening. The poet also mentions the "corpse of the earth". The reader gets the idea that the poet believes that the Earth is dead. Whatever the poet believed about humanity before his experiences are gone now, he now sees a dead earth. There is no more spirit or anyone with a shred of decency to do the right thing in his eyes. They simply let it slide. There are no positives to be taken from this at all. Not a shred of good came of it. "Night Over Birkenau" by Tadeusz Borowski is a poem which leaves the reader with a powerful impression of a place. ?? ?? ?? ?? Paul Edmond ...read more.