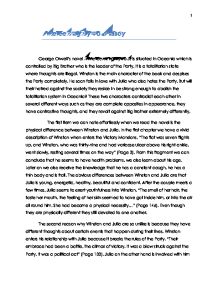 Nineteen Eighty-Four Essay George Orwell's novel Nineteen Eighty-Four, is situated in Oceania which is controlled by Big Brother who is the leader of the Party. It is a totalitarian state where thoughts are illegal. Winston is the main character of the book and despises the Party completely. He soon falls in love with Julia who also hates the Party. But will their hatred against the society they reside in be strong enough to abolish the totalitarian system in Oceania? These two characters contradict each other in several different ways such as they are complete opposites in appearance, they have contrastive thoughts, and they revolt against Big Brother extremely differently. The first item we can note effortlessly when we read the novel is the physical difference between Winston and Julia. In the first chapter we have a vivid description of Winston when enters the Victory Mansions. "The flat was seven flights up, and Winston, who was thirty-nine and had varicose ulcer above his right ankle, went slowly, resting several times on the way" (Page 3). ...read more.

Winston enters his relationship with Julia because it breaks the rules of the Party. "Their embrace had been a battle, the climax of victory. It was a blow struck against the Party. It was a political act" (Page 133). Julia on the other hand is involved with him because she is attracted to Winston s******y. Another example of their how they differentiate is that throughout the whole novel, Winston lurks as if he is being watched unlike Julia who can roam without suspicion because she is so involved with the Party. Julia has also not lived long before Big Brother took over Oceania so she does not remember much about the past. Winston's mind revolves around the past, as he keeps in mind memories of his mother, songs and how Oceania used to be before the Party. "He remembered his mother's statuesque body bending over the gas ring to stir at something in a saucepan. ...read more.

Winston is almost the exact opposite in this sense. He is not involved at all and knows that the Party has erased all the precedent history of Oceania. That is why he cannot accept Big Brother and his rules but he rebels mentally for most of the novel until he finally meets with O'Brien. "No it is real. The Brotherhood, we call it. You will never learn much more about the Brotherhood than that it exists and that you belong to it" (Page 179). They both might not like all the rules that are enforced on them by the Party but they react to them in diverse ways. You can conclude that Winston and Julia are very contradicting to each other in their physical appearance, their thoughts and their orientation of the Party. Even though they are completely different, they still managed to fall in love with each other. It is this force that made them a threat to Big Brother. Opposites definitely do attract. ?? ?? ?? ?? 1 ...read more.