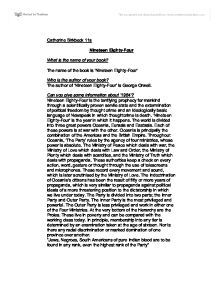 At the very bottom of the hierarchy are the Proles. These live in poverty and can be compared with the working class today. In principle, membership into any tier is determined by an examination taken at the age of sixteen. Nor is there any racial discrimination or marked domination of one province over another. "Jews, n*****s, South Americans of pure Indian blood are to be found in any rank, even the highest rank of the Party" The official language of Oceania is Newspeak. Which is the shortened, more practical version of English. If any person even gestured towards dislike of 'The Party' they would be tortured and then killed. 'The Party's' whole power is built on hatred of one another; even daughters despise their mothers and denounce them to the thought police to be killed. ...read more.

And again in 'Nineteen Eighty-Four' we are told the story of a totalitarian government ruling a vast power, these startling prophecies are already in motion, only since last Tuesday's tragedy in America, have I seen George Orwell's power of persuasion in evidence. For example, Britain has joined with America in eradicating 'terrorism' against the 'civilised world', although the American and British armies have endlessly been bombing innocent civilians in Iraq since the Gulf War ten years ago. This story shows how the propaganda used to justify the war with Oceania and Eastasia is effectively used to brainwash a whole nation into hatred of another nation for no reason at all. From reading 'Nineteen Eighty-Four' I have started to question thoroughly the methods of how the western world operates. It is amazing how Orwell has seen into the future, and although he is a socialist, he has summarised the problems with a democracy socialism and capitalism at the same time. ...read more.