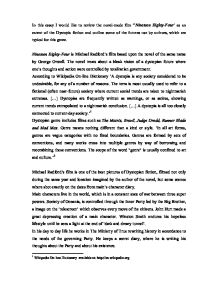 ''Nineteen Eighty-Four' as an extent of the Dystopia fiction

In this essay I would like to review the novel-made film ''Nineteen Eighty-Four' as an extent of the Dystopia fiction and outline some of the futures use by authors, which are typical for this genre. Nineteen Eighty-Four is Michael Radford's film based upon the novel of the same name by George Orwell. The novel treats about a bleak vision of a dystopian future where one's thoughts and action were controlled by totalitarian government. According to Wikipedia On-line Dictionary 'A dystopia is any society considered to be undesirable, for any of a number of reasons. The term is most usually used to refer to a fictional (often near-future) society where current social trends are taken to nightmarish extremes. [...] Dystopias are frequently written as warnings, or as satires, showing current trends extrapolated to a nightmarish conclusion. [...] A dystopia is all too closely connected to current-day society.'1 Dystopian genre includes films such as The Matrix, Brazil, Judge Dredd, Runner Blade and Mad Max. Genre means nothing different than a kind or style. 'In all art forms, genres are vague categories with no fixed boundaries. Genres are formed by sets of conventions, and many works cross into multiple genres by way of borrowing and recombining these conventions. ...read more.

Through the 'two minutes hate' everyone sits watching the screen and begins to scream at images of the enemy to then, almost religious chant for the sake of their leader. It is a world where everyone looks the similar wearing the same suits, and behaves almost the same! This scene of the film shows extremely conformity of the party members' class. One of the typical aspects of Dystopian Fiction which we have occasion to see in the film is poor living and working conditions. Perhaps as a result of the wars, the urban area of the city lies in ruins. Everything seems to be in petite supply and what is available are of rather poor quality. People live in demolished houses and sleep in bug-infested bedrooms. The Party claims that this is due to the war effort. As in dystopian fiction, the Inner Party members, who are at the top level of Oceania society, live in almost luxury apartments and have access to a variety of quality food stuff as wine and sugar, those are not available for the rest of population. In a fantastic way Radford shows us a hierarchical society where division between the upper, middle and the lower class are final and unbreakable. ...read more.

Whether we will believe it or not, we still are manipulated and controlled by our governments. This essay analysis only some aspects of Dystopian fiction represented in the Nineteen Eighty-Four film. The film demonstrates a life in horrifying world, where there is no escape from the authority of government. It treats about the very basic and most important issues of life in Dystopian world like a 'society, government, wars (...), the place of the individual, the hardship of being alone, the concept of holding two contradictious thoughts at the same time, the nothingness of being human, love family (...)'5. It is powerful film, which through greatly pictured life in a soul-destroying world, put audience into real situation of fear, despair and total mind control that characters are suffering. After seeing it not one spectator feels some kind of sympathy for Winston, sharing with him his hopelessness and his desire of better life. The hopeless of the story is portrayed tremendous, it transport the viewer to different, scary world, where 'if you want to imagine the future of humanity, imagine a jack boot stamping on a human face for ever'. 1 Wikipedia On-line Dictionary available at: http://en.wikipedia.org 2 Ibid 3 Wikipedia On-line Dictionary available at: http://en.wikipedia.org 4 Dan Goldwasser (1999) Nineteen Eighty-Four: The Music of Oceania Available at: http://www.filmtracks.com/ 5 'Room 102' (2002) User comments available at: http://www.imdb.com/title/tt0087803 ?? ?? ?? ?? ...read more.

A fair response however there are flaws. These include addressing Orwell's magnum opus as a 'novel turned film' as well as explicity citing wikipedia on more than one occassion. All should be avoided if high marks are desired. Equally, this ...

A fair response however there are flaws. These include addressing Orwell's magnum opus as a 'novel turned film' as well as explicity citing wikipedia on more than one occassion. All should be avoided if high marks are desired. Equally, this candidate's vague and often generic examination of the text leaves question marks over their understanding. However, it's not a terrible essay and certain points are valid and well-made.

Fair, this candidate examines the text through reference and quotations which is effective. However, one would expect a greater understanding of basic literary techniques and their influence upon both plot, and the novel as a whole.

Also fair as spelling, grammat and punctuation are all fine. There is the occassional typo which can be addressed through a simple re-read. Perhaps the fluency of sentence structure could be improved however generally speaking the essay is fair.