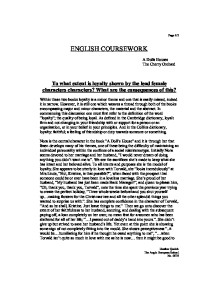 Nora is the central character in the book &quot;A Doll's House&quot; and it is through her that Ibsen develops many of his themes

Page 1/3 ENGLISH COURSEWORK A Dolls Houses The Cherry Orchard To what extent is loyalty shown by the lead female characters characters? What are the consequences of this? Within these two books loyalty is a minor theme and one that is easily missed, indeed it is narrow. However, it is still one which weaves a thread through both of the books encompassing major and minor characters, the material and the abstract. In commencing this discussion one must first refer to the definition of the word "loyalty"; the quality of being loyal. As defined in the Cambridge dictionary, loyal: firm and not changing in your friendship with or support for a person or an organization, or in your belief in your principles. And in the Collins dictionary, loyalty: faithful; a feeling of friendship or duty towards someone or something. Nora is the central character in the book "A Doll's House" and it is through her that Ibsen develops many of his themes, one of these being the difficulty of maintaining an individual personality within the confines of a social role/stereotype. Initially Nora seems devoted to her marriage and her husband, "I would never dream of doing anything you didn't want me to". ...read more.

Nora, fully realizing her predicament has the idea of turning to Rank for help, even here her loyalty to her husband is ever present, "You know how deeply... Torvald is in love with me. He would never hesitate for a moment to sacrifice his love for my sake". When Rank then responds to this with his own declaration of love for Nora the mood changes dramatically, becoming brisk and even almost dismissive on Nora's part; the concept of being unfaithful to Torvald hasn't even entered her mind, even if it would be to her advantage. Nora's loyalty continues, we are introduced to the fact that she has contemplated suicide in an attempt to stop Torvald from taking the inevitable blame. Furthermore, she believes, as she tells Kristine, that the "wonderful thing" will happen, the point where Torvald will discover the forgery and take all the guilt upon himself and so reveal the true depth of his love for Nora. With Act III comes the climax of the play and the revealing of the true nature of Torvald's character. On discovering the truth instead of selflessly laying himself down for his wife, "You mustn't try to save me, Torvald!" ...read more.

The biggest sign of her loyalty to the past is that of her refusal to accept the present. She turns up her nose at Lopakhin's idea of renting land out in an act of denial. She refuses to believe that the Cherry Orchard will be sold, holding out instead for some miracle. In this she loses her greatest financial asset and her home. These two characters both show signs of strong loyalty but both in different ways and to different things. Subsequently, the consequences for both are extremely different. Nora, in "A Doll's House", through her questioning of her marital relationship and the resulting recognition of false values, manages to achieve the prospect of self awareness and development; this is a direct consequence of her eventual loyalty to herself. Ranyevskaya's loyalties, on the other hand, lead to her downfall. The combination of her personal loyalties, her enslavement to emotions of which extravagance is the consequence, and her loyalty to the past which results in the denial of the present, can be seen as the two greatest personal factors that are responsible for her loss of the Cherry Orchard. Word count = 1,441 (excluding title and any other additional information) Total no of words used = 1,518 ...read more.