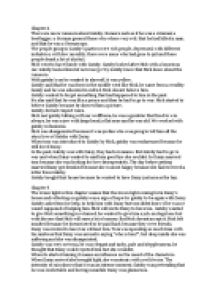 ﻿Chapter 4 There are more rumours about Gatsby. Rumors such as if he was a criminal, a bootlegger, a German general those who where very evil, that he had killed a man, and that he was a German spy. The people going to Gatsby?s parties were rich people, depressed, with different industries, with low morality, there were some who had gone to jail and these people drank a lot of alcohol. Nick went to have llunch with Gatsby. Gatsby looked after Nick with a luxurious car. Gatsby looked kind of nervous (p.70). Gatsby knew that Nick knew about the rumours. With gatsby?s car he wanted to showoff, it was yellow. Gatsby said that he was born in the middle west like Nick, he came from a wealthy family and he was educated in oxfrod. Nick doesnt believe him. Gatsby wanted to forget something that had happened to him in the past. He also said that he was like a prince and then he had to go to war. Nick started to believe Gatsby because he showed him a picture. Gatsby did not respect rules. Nick met gatsby talking with mr wolffhiem, he was a gumbler that fixed to win always, he was a jew with large head, a flat nose and he was old. We worked with gatsby in business. Nick was disappointed because it was jordan who was going to tell him all the story love of Gatsby with Daisy. ...read more.

Gatsby was excited about showing Daisy his house. First, gatsby was embarrased, then he was enjoying having her in his house, then he was excited and then he came down because it was not a dream, it was a reality having Daisy. Gatsby started taking clothes out, he was showing off and Daisy started crying because those clothes were beautiful. Gatsby accepted to Daisy that his house was there to see her house. it started raining again, the mood changed again. Daisy hugged Gatsby. Gatsby was rejected abouth what he had said. the light by the deck was not a dream anymore because Daisy was there with him. The song showed that they were having fun, that they cant escape from the situation. Chapter 6 A reporter went to gatsby?s house and asked him what does he has to say Gatsby real name was James Gatz and he is from the north. There were more rumors of him such as that he lived in a boat and not in a house. Gatsby told Dan Cody that a storm was coming and they had to go, gatsby saved his life. Gatsby didnt received money from his parents, its was a lie. Gatsby became tired of women. Dan cody who was a millionare was looked by girls because of his money. He married ella Kaye, when Dan cody died, gatsby (heredar) ...read more.

Tom asked gatsby what were his intentions in his house. Tom is being very fake by saying Daisy of having an affair while he has a mistress. Tom is descriminating, is being r****t and very rood with gatsby. Gatsby told toma ll the truth that Daisy never loved him and she only married him because she was tired of waitng for him. Tom started askind Daisy if that was true and if they had been seeing themselves for that five years. Gatsby said that they couldnt see each other but they were in love for all that time. Tom didnt matter because feeling are not important for him, the only thing that cares to hi mis having s*x. Daisy is very angry towards tom because he accepted about his lover. She was really hurt. Gatsby wanted Daisy to tell tom that she loved him and not tom. Daisy hasitated. Daisy accepted but then she contradicted. Tom acused gatsby for being a bootlegger in front of Daisy, Daisy was shocked. Tom won the argument because Daisy wouldnot leave him. Gatsby and Daisy went together to talk, tom didnt care because he knew that Daisy loved him and nothing will happened with gatsby. Daisky killed Myrtle in a car accident having gatsby besides. Gatsby said ?i was?. Gatsby talks with Nick, he wanted to stay outside to see if Daisy and Nick have a fight. But everything was okay. Nick was tired of all the problems of these people, they were never happy. ...read more.