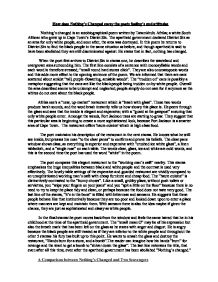 How does Nothing's Changed covey the poets feeling's and attitudes Nothing's changed is an autobiographical poem written by Tatamkhulu Afrika; a white South African who grew up in Cape Town's Disrict Six. The apartheid government declared District Six as an area for only white people, and soon after, the area was destroyed. In this poem he returns to District Six to find the black people in the same situation as before, and though apartheid is said to have been abolished they are still discriminated against. He states that in fact, nothing has changed. When the poet first arrives to District Six in stanza one, he describes the wasteland and overgrown area surrounding him. The first line consists of a sentence with monosyllabic words and each word is therefore stressed; "small round hard stones click". They are also onomatopoeic words and this adds more effect to the opening sentence of the poem. We are informed that there are cans scattered about amidst "tall, purple-flowering, amiable weeds". ...read more.

He knows what he will see inside, but presses his nose "to the clear panes" to confirm and prove his beliefs. The clear pane window shows class, as everything is superior and expensive with "crushed ice white glass", a linen tablecloth, and a "single rose" on each table. The words clear, glass, ice and white are cold words, and this is the second time the poet has used the word "white" in the poem. The poet compares this elegant restaurant to the "working man's caf�" nearby. This stanza emphasises the huge inequalities between black and white people and the contrast is used very effectively. The lovely table settings of the expensive and guarded restaurant are vividly compared to an unsophisticated working man's caf� with cheap furniture and cheap food. The "haute cuisine" is distinctively contrasted to the "bunny chows". Like a small, grubby place, without posh toilets or serviettes, you "wipe your fingers on your jeans" and you "spit a little on the floor" because there is no need to try to keep the place tidy and clean, or perhaps because the food does not taste very good. ...read more.

He wants to smash the glass and destroy the restaurant, "Hands burn for a stone, and a bomb".The reader can imagine how his hands "burn" for revenge and the want to get a bomb to "shiver down the glass". The last line reiterates the title, that even after all this time, even after the apartheid government has been abolished "Nothing's changed." A Comparison between Nothing's Changed and Two Scavengers Nothing's Changed by Tatumkhulu Afrika is about the segregation between black and white people and "Two Scavengers in a Truck, Two beautiful People in a Mercedes" by Laurence Ferlinghetti is about two couples who are different because of their social class and wealth. They have many similarities but are also different in some ways. They are both very effective poems which are written to state some kind of inequality between people, and they are both globally key issues. Afrika's poem is set in South Africa, Cape town, and Ferlinghetti's poem is set in San Francisco in America; one is a third world country and the other is a highly developed country, yet there are still prejudices in both. ?? ?? ?? ?? ...read more.