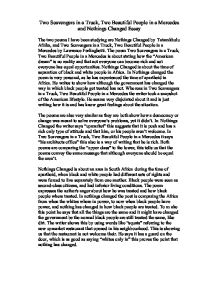 The lines are getting longer in this part of the poem this reflects that the writer is getting more and more worked up and angry about the situation in this place. He compares the new restaurant to the one down the road where his is more at home. He says "linen falls" about the tablecloths but he compares it to "plastic tables" at the other eating-place. Then he says the caf� is "in the bone" we now no that he is much more at home in the caf� than at the fancy restaurant. This poem makes you think about how it was for black people growing up in Africa with no rights and getting treated like scum. The writer was called Tatamkhulu Afrika and he lived in south Africa and he wanted to speak up about how the black people were getting treated so he wrote poems thinking the government couldn't stop him yet they still found a reason to put him into jail. The government in South Africa at that time were the only power and if anyone questioned their authority than they would be killed. I would like to think that the country has moved on since then yet some dominant figures are still controlling and not giving people the right to vote or choose their government. ...read more.

The final verse says how the bin men were longing to be the people in the car and how if things were different they could be. Its also says, "holding the four together if any thing was possible" this is saying that anything could happen if only the bin men had had the same chances and opportunities. The poem was written to show how America is not a democracy. The young bin man could have had the same chances as the Mercedes driver so this is backing up the point that the country is not a democracy. Throughout the poem he compares what the rich couple have and what the poor bin men do not. If the country was a democracy and every thing was fair and everyone had the same chances, and obviously they didn't have the same chances. The theme through out is what some have and what others don't and this is shown by how the people have different possessions. Both poems show how writing a poem can express a message to all its readers and show how a good poet can use words to change peoples feeling about everything, and anything. In Nothings Changed the rhythm is very strong and the author repeats the word to create onomatopoeia, to a great effect. Although in Two Scavengers in a Truck, Two Beautiful People in a Mercedes the writer doesn't use rhythm or onomatopoeia, yet it still creates a great poem. ...read more.