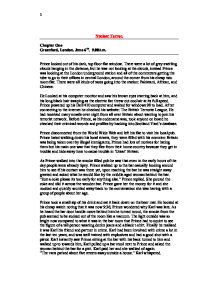 Nuclear Terror. Chapter One Greenford, London. June 6th. 9.00Am. Prince looked out of his dark, top floor flat window. There were a lot of grey swirling clouds hanging in the distance, but he was not looking at the clouds, instead Prince was looking at the London underground station and all of the commuters getting the tube to go to their offices in central London, around the corner from his cheap two room flat. There were all kinds of races going into the station: Pakistani, African, and Chinese. He Looked at his computer monitor and saw his brown eyes starring back at him, and his long black hair swaying as the electric fan threw out cool air at its full speed. Prince powered up his Dell 410 computer and waited for windows 98 to load. After connecting to the internet he checked his website: The British Terrorist League. He had received many emails over night from all over Britain about wanting to join his terrorist network. Before Prince, as his codename was, took anyone on board he checked their criminal records and profiles by hacking into Scotland Yard's database. Prince disconnected from the World Wide Web and left his flat to visit his local pub. Prince hated walking down his local streets, they were filled with his enemies: Britain was being taken over by illegal immigrants, Prince had lots of motives for hating them but his main one was that they flee from their home country because they get in trouble and hide away here to cause trouble in 'Great' Britain. As Prince walked into the smoke filled pub he saw that even in the early hours of the day people were already tipsy. Prince walked up to the bar casually looking around him to see if his contact was there yet, upon reaching the bar he was straight away greeted and asked what he would like by the middle aged woman behind the bar. ...read more.

He printed off the page twenty times and passed round a copy to everyone. The page was split into eight sections, Events, Society Education and media, Science and technology, Literature and drama, Music, Sport and Recreation, Religion and philosophy, Arts and architecture. The room was silent while everyone read the sheet they had just been given, the only noise was the whir from the hard drive on Cussack's laptop. Six hours had passed since he had given the two clues to the SAS team and now it was time for Prince to give them some more information. Prince lifted his phone and entered the number that would connect him to Sergeant Cussack, Prince choose to give the information to him, because he disliked the SAS and their paid killers that wanted to end Prince's life. The phone rang and was picked up nearly straight away. "Yes?" Cussack asked, his voice sounded like he was angry at something or someone. "Solved it yet?" Prince replied in a sarcastic way, as he knew that they had not. There was a moment of silence. "I'll take that as a no then. Well I will give you some help, but remember if you try to disarm the b**b it will go boom and many people will die, the only chance you have of saving some lives is to evacuate everyone because you would not want a repeat of the 1995 terrorist attack." Prince said in a clever way, as he knew he had them in his control. Cussack pressed the speaker button on the phone and looked around the room at the stunned faces of his team, Hood was looking at his laptop and searching for 1995 events, then the printer started up printing out enough copies to go round. Once these were passed out any events related to bombs or terrorists in any way was ringed, this came up with three matches, a b**b in a car park below a federal office block, another b**b in Paris, and a nerve gas attack on Tokyo's underground. ...read more.

standing next to Cussack went down with a thud, from the cry of pain that Johnson let out he could tell that he would have been dead before he had hit the floor. The hostages were easy to recognise as they all were wearing either plain civilian clothing from the tour bus or blue coveralls from the plant itself. All of the men had been taken out, the room still echoed the sound of gunfire and the hostages where either crying or they had their hands on their ears to murmur the pain from the heavy cracks of he exchange of fire. Cussack heard another thud on the stairwell, Stewarts had taken him out from the shaft. The man lay just outside an office room, Cussack guessed the man to be Prince and ordered two of his men to go and check whether he was dead. Upon arriving on the suspected Prince they checked him for Identification, they found it in his wallet it said Roy Prince Palmer, they had finally found him and killed him. Cussack then announced over the plant's speakers that any remaining men would not be killed if they surrended and means they had not killed anyone they would be let off a lot. Lots of them did this, they were taken away and Cussacks team did a single search of the Plant to see if they had missed anyone. There was no one left, so they quickly returned to Bridge, they put him on a stretcher and got him into the van and drove it to the helipad to avoid the press. Their mission was done but Cussack was dreading the paperwork that would have to be done. The mission was a partial success as they neutralized the target but Cussack had lost a man. The family would be informed of the tragedy when they got back to base. Cussack knew Prince was a man that he would never forget. By Adam Cooper, CL11. ?? ?? ?? ?? 1 ...read more.