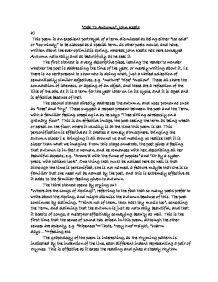 Ode To Autumn&quot;, John Keatsa) This poem is an excellent portrayal of a term dismissed as being either &quot;too cold&quot; or &quot;too windy&quot; to be classed as a special term

"Ode To Autumn", John Keats a) This poem is an excellent portrayal of a term dismissed as being either "too cold" or "too windy" to be classed as a special term, as other poets would, and have, written about the ever-optimistic spring, whereas John Keats has here conveyed Autumn naturally and as beautifully as he sees it. The first stanza is a very descriptive piece, leaving the reader to wonder whether the poet is addressing the time of the year, or merely writing about it, i.e. there is no verb present to show who is doing what, just a varied collection of semantically similar adjectives, e.g. "mature" "ripe" "mellow". These all share the connotation of lateness, or ageing of an object, and these are a reflection of the title of the ...read more.

From this stage onwards, the poet gives a feeling that autumn is in fact a woman, and he romances with her, describing all her beautiful aspects, e.g. "Drows'd with the fume of poppies" and "Or by a cyder-press, with patient look". One thing that must be noticed here as well is that although the time is personified, she is not named, a feature maybe that she is so familiar that she need not be named by the poet, and this is extremely effective as it adds to the familiar feeling given to autumn. The third stanza opens by crying out "Where are the songs of Spring?", referring to the fact that so many poets prefer to write about the Spring, and might dismiss the autumn because of this. ...read more.

b) Another poem that conveys nature beautifully well to me is that of "God's Grandeur" by Gerard Manley Hopkins. This is a poem in wonder of God's work, where he questions mankind's attitude to Him and to His work. This is conveyed in the second part of the sonnet where the poet describes the situation as the "last lights off the black West", which I believe is extremely effective as west conveys the sunset, and poetically speaking, death and destruction, but, the poet continues by stating "Oh, morning at the brown brink eastward springs", meaning that dawn will come, where all decay and maliciousness will cease to be and the sun will shine through. ...read more.