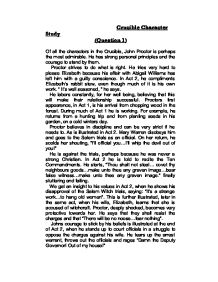 Of all the characters in the Crucible, John Proctor is perhaps the most admirable. He has strong personal principles and the courage to stand by them.

Crucible Character Study (Question 1) Of all the characters in the Crucible, John Proctor is perhaps the most admirable. He has strong personal principles and the courage to stand by them. Proctor strives to do what is right. He tries very hard to please Elizabeth because his affair with Abigail Williams has left him with a guilty conscience. In Act 2, he compliments Elizabeth's rabbit stew, even though much of it is his own work. " It's well seasoned, " he says. He labors constantly, for her well being, believing that this will make their relationship successful. Proctors first appearance, in Act 1, is his arrival from chopping wood in the forest. During much of Act 1 he is working. For example, he returns from a hunting trip and from planting seeds in his garden, on a cold winters day. ...read more.

Johns courage to stick by his beliefs is illustrated at the end of Act 2, when he stands up to court officials in a struggle to oppose the charges against his wife. He tears up the arrest warrant, throws out the officials and rages "d**n the Deputy Governor! Out of my house!" At the end of the play, in Act 4, John faces the ultimate test of his courage and moral values when he is faced with signing the document, where to lie would save his life. Proctor cannot sign the lie and exclaims: "Because it is my name! ...Because I lie and sign myself to lies!" Abigail Williams is undoubtedly the most despicable character in the play. Her young and innocent appearance conceals a sly, selfish and callous girl. Abigail had once been John Proctor's lover, but was then rejected. ...read more.

You drank a charm to kill John Proctors wife!" Abigail then smashes Betty across the face and shouts "shut it, shut it!" As the thoughts and ideas of witchcraft and devil worship spread through Salem, Abigail finds an easy way to get rid of her enemies without degrading her name any further. By accusing them, or convincing others to accuse, Abby is able to place many innocent people on trial for witchcraft. An example of this occurs at the end of Act 3, when Abigail, having convinced an assembly of girls to help her accuse Mary Warren, manipulates the situation. The assembly slowly descends into a screaming crisis, which makes Mary sound like a mad woman. Abigail uses this technique many times in the play. On this occasion, Mary Warren blames Proctor to save her life. The underlying evil of mindless persecution pervades this play. There are many characters to admire and despise. Abigail Williams deserves some sympathy, as she was callously cast aside by Proctor. Nevertheless, her decent into evil, surpasses them all ...read more.