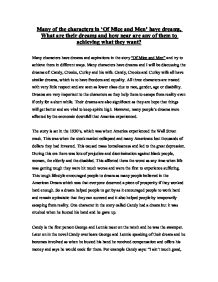 Many of the characters in 'Of Mice and Men' have dreams. What are their dreams and how near are any of them to achieving what they want? Many characters have dreams and aspirations in the story "Of Mice and Men" and try to achieve them in different ways. Many characters have dreams and I will be discussing the dreams of: Candy, Crooks, Curley and his wife. Candy, Crooks and Curley wife all have similar dreams, which is to have freedom and equality. All three characters are treated with very little respect and are seen as lower class due to race, gender, age or disability. Dreams are very important to the characters as they help them to escape from reality even if only for a short while. Their dreams are also significant as they are hope that things will get better and are vital to keep spirits high. However, many people's dreams were affected by the economic downfall that America experienced. The story is set in the 1930's, which was when America experienced the Wall Street crash. This was when the stock market collapsed and many Americans lost thousands of dollars they had invested. This caused mass homelessness and led to the great depression. During this era there was lots of prejudice and discrimination against black people, women, the elderly and the disabled. ...read more.

Crooks has lots of possessions including law books. This is shown in the following quote: "And he had books, too; a tattered dictionary and a mauled copy of the California civic code for 1905." This shows us that he has an interest in law and his own rights. This gives us the impression that Crooks dreams of freedom as he keeps a law book on him so he knows what rights he does have even though there are very few. Crooks had a daydream about the past when he did not know of r****m as a child and played with the white children unaware of the discrimination he was later to face. People treat Crooks with no respect yet he does not react but he doesn't have a choice as he is outnumbered and treated unfairly. Crooks does not mind Lennie and Candy visiting his room as they are similar to him as they are both treated with less respect due to mental or physical disabilities. When Crooks first hears about the dream he laughs at Lennie and says he is crazy. This is shown by the following quote: "You're as crazy as a wedge. What rabbits you talking about?" This simile shows how crazy Crooks thinks Lennie is. . However, after Candy explains it all to him Crooks gets involved with it and says " If you guys wanted a hand to work for nothing - just for his keep, I'd come and lend a hand." ...read more.

For example Curley's Wife says: "swell guy, ain't he?" this shows that she is being sarcastic and really telling them he's a bad husband. So far most of the character we met, apart from the boss and slim, have dreams; however, it is unlikely that anyone will fulfill these dreams as one small event could end on big dream. Contrasting dreams are important to different people and when the novel was set dreams were more significant due to the corrupt way of society back then. So dreams were hope, inspiration and optimism to those who were disliked by society and were at a disadvantage. The title of the novel "Of Mice and Men" was derived from the poem "To A Mouse". John Steinbeck may have chosen this, as the meaning of to a mouse is that no plan is foolproof, which is what happens in the story as the dream was not definitely going to happen and it did not. He may have also done this as in "To A Mouse" Robert Burns says: "The best laid schemes o' mice an' men Gang aft agley." This translates as the best-laid plans of mice and men often go astray. This is an overview of "Of Mice and Men" as the dream was well planned but it went wrong. No Matter how much you plan and how near you get nothing is set in stone. ?? ?? ?? ?? ...read more.

In the introduction, the student has obviously shown their understanding by breaking down the question and outlining exactly which characters they were going to explore. However, there are many areas where further development of the argument was needed in order ...

In the introduction, the student has obviously shown their understanding by breaking down the question and outlining exactly which characters they were going to explore. However, there are many areas where further development of the argument was needed in order to ensure clarity and higher marks. To aid making their response more explicit, I encourage students to plan their essays before. Whilst many students do not like the idea of planning and find it tedious, a well-argued and structured essay will always need some extent of planning. This would ensure that their argument(s) are fully backed up by relevant examples and that their points are developed in relation to the question. At times, the points raised in this piece of work is slightly irrelevant or is not developed enough to support the studentÃ¢â‚¬â„¢s line of argument in answering the question set. This does affect the mark of the essay.

Whilst there is a clear understanding of the text displayed throughout the essay, I question the level of analysis present in it. The approach of taking each character in turn and then almost chronologically retelling their story to the examiner with quotes to support this along with the occasional analysis, has not done the student any favours. I would recommend developing the question further and defining what is meant by a dream and giving some background (this they only briefly touch on by assertions). This would help guide the essay better and sets the question in context immediately. In terms of structure, the student has done well with setting it out and linking the paragraphs. What the student has Ã¢â‚¬Ëœtripped upÃ¢â‚¬â„¢ on, is the fact that they have too much information and therefore want to write everything they know. Being selective and developing the points chosen is more important and scores higher marks than narrating through the story again on paper. As a result of not being very analytical, there was also a lack of evaluation. Most of the time, the student simply asserted a point, stated a quote and did not explain the relevance of the point made in relation to the question. The linkage of the essay was good and therefore the essay naturally led to a suitable and appropriate conclusion. Whilst the last sentence was a strong sentence to conclude on as it summed up the conclusion very well without repetition, the conclusion lacked evidence to link it to the rest of the essay (slightly undermining the point of a conclusion).

I was rather surprised by the spelling, grammar and punctuation of the essay. There were many errors that simply are unacceptable at GCSE level. There were words misspelt or typed wrongly (for example, Ã¢â‚¬ËœfeltÃ¢â‚¬â„¢ rather Ã¢â‚¬ËœfellÃ¢â‚¬â„¢) or words having letters missed off (for example, in a quote, it was Ã¢â‚¬ËœandÃ¢â‚¬â„¢ and not Ã¢â‚¬ËœanÃ¢â‚¬â„¢). Above this, there were punctuation and grammar problems as well. Such issues should not be arising in an English essay at GCSE level. I believe most mark schemes in English have a section for this category, and without doubt, the student would score a low mark in this category. No technical terms were required of the student in this essay. Interestingly, the question is worded in the present tense. I have found that most essay questions for such texts are in the past tense from experience and thus, I have always been expected to write everything in the past tense. The student does switch from the present and past tense a lot, perhaps due to the wording of the question as well. However, I believe that tenses are a common mistake for GCSE level students, although this problem generally only appears in essays written under exam conditions.