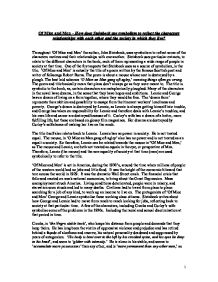 Of Mice and Men &amp;#150; How does Steinbeck use symbolism to reflect the characters relationships with each other and the society in which they live?

Of Mice and Men - How does Steinbeck use symbolism to reflect the characters relationships with each other and the society in which they live? Throughout 'Of Mice and Men' the author, John Steinbeck, uses symbolism to reflect some of the characters motives and their relationships with one another. Steinbeck uses particular extracts, to relate to the different characters in the book, each of them representing a wide range of people in society at that time. One of the first aspects that Steinbeck uses as a source of symbolism, is the title. 'Of Mice and Men' is actually the title of a poem written by the famous Scottish poet and writer of folksongs Robert Burns. The poem is about a mouse whose nest is destroyed by a plough. The best laid schemes 'O Mice an Man gang oft agley,' meaning things often go wrong. The poem and title basically mean that plans don't always go as they were meant to. The title is symbolic to the book, as, certain characters are metaphorically ploughed: Many of the characters in the novel have dreams, in the sense that they have hopes and ambitions. Lennie and George have a dream of living on a farm together, where they would be free. The 'dream farm' represents the ambition and possibility to escape from the itinerant workers' loneliness and poverty. ...read more.

Curley's wife represents the typical women in the 1930s. She had 'full, rouged lips and wide-spaced eyes, heavily made up. Her fingernails were red. Her hair hung in little rolled clusters. She wore a cotton house dress and red mules, on the instep of which were little bouquets of red ostrich feathers.' Curley's wife is never named in the novel: she is referred to as Curley's wife, making her sound as if she is Curley's possession, an object. She is not treated as an individual in her own right, which is something she bitterly resents, but she is seen by various other characters as a symbol of other things: a temptress, a chattel, a s*x-object, or even a piece of 'jail bait'. Although she is married she flaunts herself around the ranch in inappropriate clothing, flirting with the workers. The reason for this is because she is bored, and unhappy, and not seeking enough attention from Curley. She wants to make him jealous, by flirting with all the men in the ranch, and making him jealous. Women had to fight to get noticed at that time and their rights were not equal to that of men, s****l discrimination was a high factor. Being a woman in a ranch was a disability. Lennie is the third character in this book that is treated differently to the rest, just like Crooks and Curley's wife. ...read more.

They are prey, the victim, and society is their predator. The safest way for Lennie and the rabbits is to be quiet. The ranch itself symbolizes the society as a whole in the 1930s. The workers on the ranch live lives that are unnatural because they lead a rootless existence outside of any proper society. It symbolizes how people had to look for a job all over the country to make a living. The ranch reflects the poverty, inequality and living conditions at that time: how George searched for vermin when he first arrived at the ranch, how Crooks is separated from the rest, in his own room, due to the racial discrimination. And again, how Curley's wife is treated in the ranch: not equal, with very little respect. George is the one who looks after Lennie and has done for years. He symbolizes the person who cares for someone and doesn't look for a reward in return. George is the opposite of Lennie. He is 'small and quick, dark of face, with restless eyes, and sharp, strong features. Every part of him was defined: small, strong hands, slender arms, a bony and thin nose.' He represents the head or intelligence of the pair, whilst Lennie's nature is entirely physical. George has taken on Lennie partly out of pity, partly out of affection, and partly for companionship, sticking up for him when Curley is around, telling him what to do and what not to do around the ranch, for Lennie's own benefit. 1 1 ...read more.

There are some good ideas in this essay and some interesting interpretations; what is missing here is relevant and specific reference to the text.