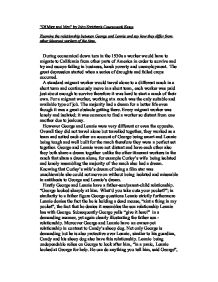 "Of Mice and Men" by John Steinbeck Coursework Essay Examine the relationship between George and Lennie and say how they differ from other itinerant workers of the time. During economical down turn in the 1930s a worker would have to migrate to California from other parts of America in order to survive and try and escape failing in business, harsh poverty and unemployment. The great depression started when a series of droughts and failed crops occurred. A standard migrant worker would travel alone to a different ranch in a short term and continuously move in a short term, each worker was paid just about enough to survive therefore it was hard to start a ranch of their own. For a migrant worker, working at a ranch was the only suitable and available type of job. The majority had a dream for a better life even though it was a great obstacle getting there. Every migrant worker was lonely and isolated; it was common to find a worker so distant from one another due to jealousy. ...read more.

He can do anything you tell him, said George", additionally this demonstrates the obedience Lennie has for George related with the owner-pet relationship. George and Lennie are almost family, they "travel together" and have each other "to talk to that gives a d**n bout [them]" unlike a standard itinerant worker. Furthermore they both share a dream of having "a little house and a couple of acres an' a cow and some pigs and live of the fatta land" this keeps their hopes up high in order to progress and not give up. George is incredibly defensive over Lennie knowing he is a weak character and sensitive; "well let him be handy. He doesn't have to take after Lennie. Lennie didn't do nothing to him. What's he got against Lennie?" Being a whole together, George and Lennie necessitate each other for different purposes which is not taken as an advantage in a negative manner but positively. To begin with, above all, George benefits companionship from Lennie. ...read more.

Knowing that the dream is a tough journey a migrant worker may not afford their luxuries but as Lennie and George share a dream together it is more affordable and hopeful. George and Lennie's expensive dream was to have a stable of their own to not work for anyone but themselves, to have "a little house and a couple of acres and a cow and some pigs" also a "vegetable patch and a rabbit hutch and chickens", all that a migrant worker would have wished to have. In a usual migrant workers eyes George and Lennie were very unique; "well, I never seen one guy take so much trouble for another guy" furthermore they become very suspicious and have no trust in them. Again George and Lennie are commented on by slim; "aint many guys travel around together". Overall George and Lennie complete each other to become one unique itinerant worker that is hard working and clever. Their exclusive friendship amazes most of the ranch with suspicion. ?? ?? ?? ?? ...read more.