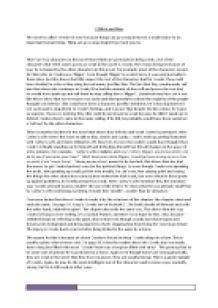 ﻿Of Mice and Men The novel is called ?Of mice & men? because things can go wrong between a small mouse to an important human being. Thing can go wrong despite how hard you try. There are two characters in this novel that I think are portrayed as being weak. One of the characters that I feel comes across as weak in the novel is Crooks. The reason being is because of how he is treated by the other characters in this novel. For example, most of the characters except for Slim refer to Crooks as a ?Nigger?. Even though ?Nigger? is a racist term, it was used normally in those days. But this shows the little respect the rest of the characters had for Crooks; they could have decided to refer to him using his real name, just like Slim. The fact that they continuously call him that shows the weakness in Crook, if he had the amount of free will and power the rest had, he would have spoke up and tell them to stop calling him a ?Nigger?. Steinbeck may have set it out like this to show that not everyone was racist and disrespectful to whom the majority of the people thought was inferior. Slim could have been a character just like Steinbeck, he?s showing that he is not racist and is empathetic to Crook?s feelings, and is aware that despite his skin colour, he is just as superior. ...read more.

Again, he may be the most intelligent out of the characters and in some ways, mentally strong. But he is still weak in other ways. Another character that Steinbeck portrays as being weak is Curley?s wife. The apostrophe in ?Curley?s? is possessive, this shows that Curley?s wife belongs to Curley and that he is her owner. She is referred to as ?Curley?s wife? throughout the novel and is not named. It also shows how unimportant she is and how little the characters think of her. Another way she is portrayed as weak is by her attitude towards the men in the novel. Curley doesn?t pay her much attention, so she feels insecure and lonely. This makes her want the attention of the other men and makes her feel superior and important, even though she isn?t. The characters talk about her in a negative way behind her back. For example, after Curley?s wife is introduced George say?s ?Jesus, what a tramp?. The use of the word ?Jesus? makes Georges reaction the Curley?s wife seem dramatic, this shows that Curley?s wife is a huge problem if she causes such dramatic responses. Also he refers to her as a tramp. ?Tramp? can mean many things, but one definition of a tramp for a female is a prostitute or a person regarded as promiscuous. ...read more.

Crooks is a black man, and Curley?s wife is a white women. So even though Crooks had dreams and was capable of getting far the only problem that would have been stopping him is the fact that he is black and racism was in full effect in those days. Also, he was the smartest among the other characters, this links back to the title ?Of mice and men? that things can go wrong despite how hard you try. So despite his intelligence and how hard he learns, he still can?t get to where he wants to go in life. Nevertheless, even though Curley?s wife is white, she is a woman. Women didn?t have that much say or rights when men were involved. So her dreams and goals were not reached. For example she say?s ?I never got that letter, I always thought my ol? lady stole it? She is adamant that her mum stole the letter an actor ?wrote? to her, so that?s why she never became an actress. Except, going back to how powerful men were in those days, White American men especially, he may have not even written a letter, probably forgetting about her and just complimenting her because it was the heat of the moment type. This shows that Curley?s wife is not mentally strong enough to come to terms and face reality of what actually might have happened, again that?s her way of feeling important, because deep down she is a weak individual. ...read more.