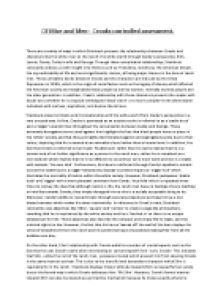 ﻿Of Mice and Men- Crooks controlled assessment. There are a variety of ways in which Steinbeck presents the relationships between Crooks and characters like the white men on the ranch: the white world through Candy's perspective, Slim, Lennie, Candy, Curley's wife and George. Through these complicated relationships, Steinbeck constantly endows us with insight into themes such as: friendship, loneliness, the American Dream, the unpredictability of life and most significantly- r****m; all being major themes in the lives of ranch men. These unhealthy bonds between Crooks and the characters are induced by the Great Depression in 1930s, which is the origin of racial factors such as the legacy of slavery which affected the American society and marginalised black people as well as women, mentally stunted people and the older generation. In addition, Crook's relationship with these characters presents the reader with doubt as to whether he is a typical stereotyped 'black victim' or a more complex- three dimensional individual with motives, aspirations, and desires like all men. Steinbeck presents Crooks and his relationship with the white world from Candy's perspective in a very unusual way. At first, Crooks is portrayed as an outsider as he is referred to as a 'stable buck' and a 'n****r' several times throughout the conversation between Candy and George. These extremely derogatory terms used against him highlight the fact that black people have no place in the 'white' society and that they are highly discriminated against and segregated purely due to their colour, depicting that he is viewed at an animalistic level rather than a human level. ...read more.

The relationship between Crooks and Lennie is by far the most captivating of all relationships. It is quite different to the relationships between Crooks and the other characters due to a range of distinct reasons; the main reason stemming from Lennie and his innocent mind. Steinbeck deliberately uses Lennie as the first white man to speak to Crooks and enter his room, with the intention of highlighting the possibilities of unity between black and white people, as Lennie is incapable of developing prejudiced views about people. He cannot judge them by the colour of their skin or by their status due to his stunted mind; he simply sees them as human beings. This accumulates the idea that r****m and discrimination is instilled within people, they are not born to hate. In addition, repetition of 'light' symbolises hope and a pathway to freedom for Crooks, and Lennie himself represents a key to unlock the door of hope and freedom within Crook's being. 'light' also represents purity, and due to Lennie's pure and innocent nature, he is drawn to this light like a magnet which pulls towards it what it is attracted to and sees friendship with another man at the end of that light. Furthermore, Steinbeck creates pathos and sympathy towards Crooks when he repeats 'i have a right' because it emphasises the very few precious rights Crooks has and his struggle to cling onto each and every one of them dearly. In addition, pathos is created with Crook's confession as we realise that Crooks had lived the 'Dream' before, but it was taken away ...read more.

She also stand 'still in the doorway' meaning she blocks his pathway to escaping the torture he endures, and she blocks out his hopes and dreams. Furthermore, Crooks switches to attacking her with his standard defence mode 'you got no right' when she becomes exceedingly insulting, however when she snaps back with 'you know what i can do to you if you open your trap' he stares 'hopelessly' at her indicating that for a split second, he believed that he may have gained control over her. in addition, Crooks 'drew into himself' and returned to his usual servile manner: 'yes maam' as a way of confirming that he now knows where he stands in the white society and he knows that in order to survive, he must make himself invisible in order to stay out of trouble's way. Similarly, George stands 'framed in the doorway'- he, as the leader of this dream permanently blocks the significant doorway as a way of concluding that Crooks can never be part of them, except that Crooks withdraws before he is refrained from joining due to his pride which prevents him from being downgraded: 'well just forget it'. Moreover, Steinbeck refers to the door again: 'Crooks looked at the door' symbolising that just as lennie had brought hope into his life, that hope had been robbed from him when Lennie departed, leaving Crooks to resume his life as usual, as if nothing had happened. to conclude, Steinbeck presents and develops the relationships between Crooks and other characters as very complex and each of them explores a different theme. however, the theme of r****m is present within nearly all of the relationships apart from with lennie. ...read more.