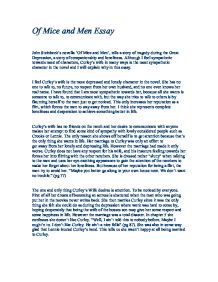 'Of Mice And Men' - Curley's wife in many ways is the most sympathetic character in the novel and I will explain why in this essay.

Of Mice and Men Essay John Steinbeck's novella 'Of Mice and Men', tells a story of tragedy during the Great Depression, a story of companionship and loneliness. Although I feel sympathetic towards most of characters, Curley's wife in many ways is the most sympathetic character in the novel and I will explain why in this essay. I feel Curley's wife is the most depressed and lonely character in the novel. She has no one to talk to, no future, no respect from her own husband, and no one even knows her real name. I have found that I am most sympathetic towards her, because all she wants is someone to talk to, to communicate with, but the way she tries to talk to others is by flaunting herself to the men just to get noticed. This only increases her reputation as a flirt, which forces the men to stay away from her. I think she represents complete loneliness and desperation to achieve something better in life. Curley's wife has no friends on the ranch and her desire to communicate with anyone makes her attempt to find some kind of sympathy with lowly considered people such as Crooks or Lennie. ...read more.

work was hard to come by, hoping desperately that being the wife of the bosses son may give her some respect and some happiness in life. However the marriage was a total disaster. In chapter 5 she confesses she doesn't like Curley. "Well, I ain't told this to nobody before. Maybe I ought'n to. I don't like Curley. He ain't a nice fella" (pg 87). She was also in some way glad that Lennie busted Curley's hand. This tells us she wasn't happy at all being married to Curley. Curley's wife is a very flirtatious character in the novel, but only to get attention. For instance, when she firsts meets George and Lennie she instantly starts to flirt with them. This gives us an impression that she is in desperate need of someone to talk to. She is also the only female character in the ranch, which would also make her feel fairly lonely and isolated. The only person to take some interest in Curley's wife is Lennie. He is the only person Curley's wife feels she can talk to, explain her problems and not just flirt outrageously with since he is much unsophisticated. ...read more.

They make judgments without getting to know her first, for instance, judging a book by its cover. Her husband Curley doesn't trust her with the other men. He forces her to stay at home all day until he gets back, which clearly tells us she must have been a really friendless person with lonely feelings. Through out the novel, I tend to feel sorry for her but at the same time I think she let herself into the situation. I have sympathy for her because she is very much isolated from others, but on the other hand I despise her because of the way she acts. In conclusion, Curley's wife is the most sympathetic character in 'Of Mice and Men' as she has much difficulty talking to the men on the ranch. They try to stay away from her, as she's known to be very flirtacious, which makes her extremely lonely. She is also forced to stay at home because of Curley's insecure feeling towards her, which makes her very isolated from others. The death of Curley's wife, in a way could have been a good thing, as she won't ever have to worry about being alone. ...read more.