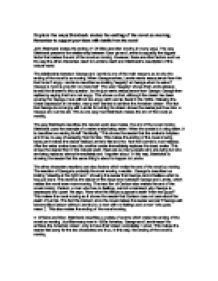 Of Mice and Men. Explore the ways Steinbeck makes the ending of the novel so moving.

This is one way how Steinbeck makes the end of the novel so moving. The way Steinbeck describes the natural world also makes the end of the novel moving. Steinbeck uses the example of a water snake being eaten. When the snake is being eaten, it is described as waving its tail "frantically." This shows the reader that the snake is helpless and it has no way of escaping from its fate. This makes the ending of the novel moving because it makes the reader realise Lennie's fate and the fact that Lennie is now helpless. After the water snake does die, another snake immediately replaces the dead snake. ...read more.