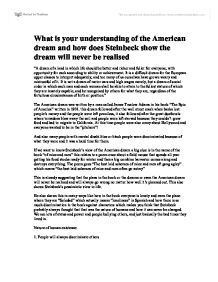 Of Mice and Men - Exploring the American Dream

What is your understanding of the American dream and how does Steinbeck show the dream will never be realised "A dream of a land in which life should be better and richer and fuller for everyone, with opportunity for each according to ability or achievement. It is a difficult dream for the European upper classes to interpret adequately, and too many of us ourselves have grown weary and mistrustful of it. It is not a dream of motor cars and high wages merely, but a dream of social order in which each man and each woman shall be able to attain to the fullest stature of which they are innately capable, and be recognized by others for what they are, regardless of the fortuitous circumstances of birth or position." The American dream was written by a man called James Truslow Adams in his book "The Epic of America" written in 1931. this dream followed after the wall street crash when banks lost people's money and the people were left penniless, it also followed after the great dustbowls where tornadoes blew away the soil and people were left starved because they couldn't grow food and had to migrate to California. ...read more.

Colour discrimination can be be shown in Crooks and the way he is isolated from everyone else and how even Curley's wife has a higher status than him. And lastly women are discriminated in the book, we see this in Curley's wife, first of all, she doesn't even have a name and she is also called many rude names like "rat trap", "jail bait" and other things. Another way in which we see how women are discriminated is in the cat houses where women are used like s*x-objects and have to be prostitutes to have money to live. 2. Status and power People always will want to feel superior to someone else. Strong dominates over the weak and the weak dominate the weaker. We see this also many times even in school where most people who are bullied will then go and bully someone else who is weaker. We see this in many ways like how George dominates over Lennie. How Curley dominates over his wife and then she bullies Lennie and crooks and candy. And we even see crooks exerting power over Lennie in how he disrespects his dream and says that many men say that but never manage do it. ...read more.

would happen sooner or later, the day would come, there would always be a "Curley's wife" that would temp Lennie and then he would kill her. The foreshadowing starts when they come to the brush and George tells Lennie to hide in the brush if anything happened because he is half expecting something bad to happen. It also adds to when they run out of weed and something like that or worse would happen soon. The killing of the poor defenceless puppy by Lennie also is foreshadowing it by showing he still kills things by accident. The killing of candy's dog is also a big factor since we hear candy tell George that he should have shot the dog himself which is foreshadowing the event where George even takes the same gun and in the same way he shoots Lennie in the back of the head just like when they killed candies dog. Another big foreshadowing event is this trouble with Lennie and Curley because Curley hates big people and we know that eventually something bad will happen and it will bring trouble. Also in the way Curley's wife is an obstacle to the dream because she's so flirtatious towards Lennie and other people and since Lennie can't fight back well she takes advantage of him. ...read more.