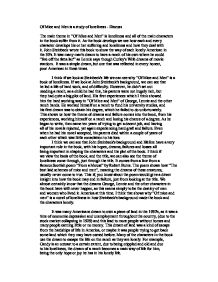 Of Mice and Men is a study of loneliness - Discuss.

Of Mice and Men is a study of loneliness - Discuss The main theme in "Of Mice and Men" is loneliness and all of the main characters in the book suffer from it. As the book develops we see how each and every character develops his or her suffering and loneliness and how they deal with it. John Steinbeck wrote this book to show the way of each lonely American in the 30's. It was many man's dream to have a ranch of his own where he could "live off the fatta lan'" as Lennie says though Curley's Wife dreams of movie stardom. It was a simple dream, but one that was reflected in every honest, poor American in these times. I think if we look at Steinbeck's life we can see why "Of Mice and Men" is a book of loneliness. If we look at John Steinbeck's background, we can see that he led a life of hard work, and of difficulty. However, he didn't set out needing a ranch, as a child he had this, his parents were not hugely rich, but they had quite a big plot of land. His first experiences which I think showed him the hard working way in "Of Mice and Men" of George, Lennie and the other ranch hands. He worked himself on a ranch to fund his university studies, and his first dream was to obtain his degree, which he failed to do unfortunately. This shows us how the theme of dreams and failure comes into the book, from his experiences, working himself on a ranch and losing his chance of a degree. As he began to write, then came ten years of trying to get a decent job, and having all of his novels rejected, yet again experiencing hard graft and failure. Even when he had his novel accepted, his parents died within a couple of years of each other which was little consolation to his loss. ...read more.

even look at that b***h...I seen 'em poison before, but I never seen no worse piece of jail bait then he, you leave her be." Not only now branded as a work by George, it is no wonder that she is lonely when the people on the ranch think of he in this sense. Her name also gives us a subtle insight to how lonely she is. Steinbeck deliberately names her Curley's wife for us to see her as a possession of his and that she will always be trapped under Curley's name and that, she will never be able to get off the ranch, as this is the only place for her, as she needs a husband to look normal, even though she doesn't love him. I think this also tells us that this is why she married Curley, so she would have a husband like everyone else, so she could be normal, although she regrets marrying ever since. As well as her isolation from other people's comments about her, we learn much about her loneliness in her conversations with Lennie, the only person who will listen, even if he doesn't understand. Her first one is when she walks into Crooks' barn and speak to Lennie there. She asks the men in there (Candy was also in there) when Curley is, only to get the reply, "You gotta husband, then you got no fooling around with other guys, causing trouble," this annoys her and she quickly says, "Sure I gotta husband, swell guy ain't he, spends all his time saying what he'll do to guys he don't like, and he don't like no one." This sudden flare up of frank dislike of her husband shows us how frail and lonely she is, if she doesn't like her husband, then who can she like, and who likes her? After asking them about Curley's broken hand and when they reply being - "He got it caught in a machine," she thinks that they are trying to fool her and cover him up, "Whatta ya think I am, a kid? ...read more.

The characters in the book all display an inability to communicate with each other, this leading to them being lonely. The first example of this is when Candy's dog gets shot, none of the people in the room speaking up over the shooting, and Candy is included in this and he regrets it later, as he wishes he had shot the dog himself, or even kept it, and this makes him lonelier as he has nothing to confide in. Another incident where the inability to communicate affects the loneliness of people is when the men in the ranch don't tell the boss or Curley's wife about how Curley 'started' on Lennie, instead covering him up in fear of being sacked. The only rare incident where Crooks does to speak is when he tries to ask Curley's wife about his rights but is soon silenced by her threats about having him executed. This book shows us many different ways of life in America, including the dreams of people in the 30's, the life of ranch men and about friendships. But the main theme stands out to be loneliness, every page we learn of a characters sadness or sorrow and of how then each of the characters are made more lonely. We have seen that every character has loneliness, from the most powerful to the weakest and how each situation affects them. I think the theme of loneliness gives us a great insight into what life would have been like in the depression of the 1930's. I think each and every character has their own way of dealing with it and this is what shapes each character's personality in the book, how they deal with this loneliness. The togetherness of George and Lennie, and the way they deal with loneliness makes them the least lonely in the book. The most lonely is then Crooks as he has no friends, he is excluded from the group of men at the ranch and is treated like dirt due to being black. By Lloyd Griffiths, 11E ...read more.