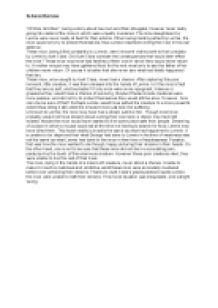 Of Mice And Men - Lennie and the Death of the Mice

﻿By Daniel Warmsley ?Of Mice And Men?, being a story about two men and their struggles, however never really going into detail of the mice in which were unjustly murdered. The mice slaughtered by Lennie were never really at fault for their actions. When being harshly petted by Lennie, the mice would only try to protect themselves, thus Lennie resorted to killing the mice in his own defence. These mice, being killed constantly by Lennie, were innocent victims sent to their predator by Lennie?s Aunt Clara. Did Aunt Clara consider the consequences that would later effect the mice? These mice may have had families of their own in which they would never return to. ...read more.

Is it the mice?s fault that they are so soft, and touchable? If only mice were more repugnant, hideous or gruesome they would have a chance of surviving. Maybe if these minute creatures were more passive, and did not try to protect themselves they would still be alive. However, how can one be sure of that? Perhaps Lennie would have petted the creature to a more powerful extent thus killing it still while the innocent mice just took the suffering. Unknown to Lennie, the mice may have had a dream just like him. Though most mice probably would not have dreamt about owning their own land, a dream may have still existed. ...read more.

Possibly, that was how the mice wanted to die though, happy picturing their dreams in their heads. On the other hand, one is not to be sure that these mice did not die in excruciating pain, paralyzed by the touch of this enormous creature. However these poor creatures died, they were unable to live the rest of their lives. The mice, dying in the hands of a mammoth creature, never stood a chance. Unable to make it in such a malicious and vindictive world these mice were so brutally murdered before ever achieving their dreams. Thanks to Aunt Clara?s graciousness towards Lennie, the mice were unable to fulfil their dreams. This moral injustice was inequitable, and outright wrong. ...read more.