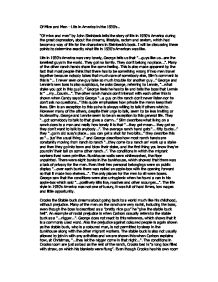 Of Mice and Men - Life in America in the 1930's... "Of mice and men" by John Steinbeck tells the story of life in 1930's America during the great depression, about the dreams, lifestyle, r****m and sexism, which had become a way of life for the characters in Steinbeck's book. I will be discussing these points to determine exactly what life in 1930's American was like. Life in 1930's America was very lonely, George tells us that "...guys like us...are the loneliest guys in the world. They got no family. They don't belong no place...". Many of the other ranch hands share the same feeling. This is also made apparent by the fact that most people think that there has to be something wrong if two men travel together because nobody takes that much care of somebody else, Slim's comment to this is "... I never seen one guy take so much trouble for another guy..." George and Lennie's new boss is also suspicious, he asks George, referring to Lennie, "...what stake you got in this guy?..." George feels he has to lie and tells the boss that Lennie is " ...my...Cousin...". The other ranch hands don't interact with each other this is shown when Candy says to George "...a guy on the ranch don't never listen nor he don't ask no questions..." this quote emphasises how private the menn keep their lives. ...read more.

Again disrespect for the ranch workers is shown when Curley's Wife refer's to them as "...a bunch of bindle stifts - a n****r an' a dum-dum and a lousy ol' sheep..." the ranch workers world seems to contain quite a lot of prejudice, both racial and s****l. Curley's Wife lashes out at Crooks when he tells her "you got no rights comin' in a coloured man's room" Crooks is forced to draw into himself and add covers of mental protection, because Curley's Wife show's how r****m is very much a part of life in the 1930's, her next words to Crooks are some of the harshest "well keep your place, then, n****r. I could get you strung up on a tree so easy it ain't even funny". The s****l prejudice in 1930's America is very obvious, the men at the ranch make this point clear because, they assume that Curley's Wife is "...a tart..." because she comes into the bunk house and supposedly gives Slim and Carlson "...the eye...". It later becomes clearer that what she actually wishes to gain from her visits to the bunk house is company. This shows that the ranch is a very lonely place for her too. Curley's Wife has a dream, although her dream is different from the men on the ranch. Instead of something to call her own, she wants fame. ...read more.

Maybe Lennie did get his dream, in one way or the other. As George is preparing to kill Lennie, he tells him one last time about "how it�s gonna be." This last bedtime story for Lennie seems to describe not a little farm that they might buy, but the heaven someone might go to in their afterlife. As Lennie begs George "Le�s do it now. Le�s go to that place now", and George replies "Sure, right now. I gotta. We gotta", and then pulls the trigger, the pair seem at peace with themselves, and each other. George knows what he is doing is right, and he knows that Lennie would agree if he had the time to explain his reasoning to him. If Lennie could comprehend the reasoning behind George�s actions, he would realise that George was taking Candy�s unknowingly offered advice: "I ought to of shot that dog myself, George. I shouldn�t ought to have let no stranger shoot my dog." The American dream is very common in 1930's America, it seems that every character in Steinbecks novel has a dream which all of them are unlikely to achieve. The world of the migrant workers in the 1930s, during the Great Depression, was monotonous and lonely. Generally speaking there was a lack of realistic ambition for the workers. The conditions in which they lived were cramped and unhygienic and encouraged prejudice and a lack of respect towards everyone. I think that Steinbeck's novel paints an accurate picture of life and culture in 1930's America. ...read more.

An exploration of this text alongside the social and historical factors that influenced the writing is a very good topic to investigate. This essay shows a good understanding of the novel and the characters but there are times when the points could be better linked to the context and the essay title.
4 Stars