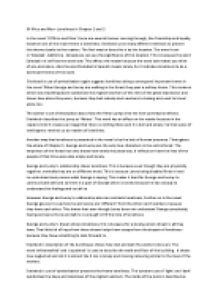 Of Mice and Men- Loneliness in Chapter 1 and 2

﻿Of Mice and Men- Loneliness in Chapter 1 and 2 In the novel ?Of Mice and Men? there are several themes running through, like friendship and loyalty, however one of the main theme is loneliness. Steinbeck uses many different methods to present this theme clearly to the readers. The first way he does this is by the location. The novel is set in ?Soledad?, California. Already we can see the significance of this location. This is because the word Soledad in it self has the word sole. This affects the reader because the word sole makes you think of one and alone. Also the word Soledad in Spanish means lonely. So it indicates loneliness to be a dominant theme of the novel. Steinbeck?s use of symbolisation again suggests loneliness being a strong and important theme in the novel. When George and Lenny are walking in the forest they pass a solitary Heron. ...read more.

This is because Lenny being disabled finds it hard to understand and process what George is saying. This makes it hard for George and Lenny to communicate well and so there is a part of George which is lonely because he has nobody to understand his feelings and to talk to. However George and Lenny?s relationship also can contrasts loneliness. Further on in the novel George goes on to say how he and Lenny are ?different? from the other ranch workers, because they have each other. This shows that even though Lenny does not understand George completely, having someone there and talk to is enough to fill the hole of loneliness. George and Lenny?s dream shows loneliness, this is because for a lonely person dream is all they have. That little bit of hope from there dream helps them escape from the despair of loneliness because they have something to look forward to. Steinbeck?s description of the bunkhouse shows how dull and dark the workers lives are. ...read more.

This shows us the loneliness of the workers. Steinbeck uses the characters in the novel to develop on loneliness. Each character in the novel represents different parts of the American society during the depression. Candy the old and physically disabled, Lenny the mentally disabled, Crooks the ethnic minority, Curly?s wife the women. All these characters are marginalised throughout the whole novel. They reflect on the sadness of that time loneliness. The anecdote Steinbeck uses reveals Lenny has absolute trust in George. It shows how strong their friendship is and how they are ?different? to the other workers. Loneliness is presented through the games the workers play. In the bunk the workers play a game of solitaire. Solitaire is a one player game and this shows the extent of their loneliness, how they are so lonely they even play on their own. Also the word solitaire again in Spanish means loneliness. Within the name of the game there is the word sole which makes you think of lonesome. ...read more.