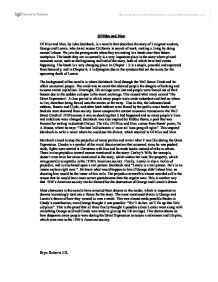 Of Mice And Men. Most characters in the novella have revealed their dreams to the reader, which is important as dreams increasingly turn into a theme for the story.

Of Mice and Men Of Mice and Men, by John Steinbeck, is a novella that describes the story of 2 migrant workers, George and Lennie, who travel across California in search of work, making a living by doing manual labour. We join the protagonists when they are resting in a brush near their future workplace. The brush they are in currently is a very important place in the story where pivotal moments occur, such as the beginning and end of the story, both of which have bad events happening. The brush is a very changing place: In Chapter 1 it is a utopia, peaceful and separated from humanity, and in Chapter 6, it is dystopian due to the symbols that set the scene for the upcoming death of Lennie. The background of the novella is where Steinbeck lived through the Wall Street Crash and its effect on normal people. The crash was an event that showed people the dangers of banking and to some extent capitalism. Overnight, life savings were lost and people were forced out of their houses due to the sudden collapse in the stock exchange. This caused what many coined 'The Great Depression': A time period in which many people were made redundant and had no where to live, therefore being forced onto the streets or far away. ...read more.

This could also be taken as a sign that the times scale of the story is short or that the couple will have a good start that quickly changes to a terrible ending. Even after the death of Curley's Wife, there are suggestions that something will go wrong: "Already the sun had left the valley". This warns us of Lennie's death since Steinbeck uses light as a device to show safety. In the 6th chapter, Lennie's dreams come true when he sees a "gigantic rabbit". These could be signs of Lennie's deteriorating mental health or his growing worries for George will do to him. There are many similar scenes which intensify the story, such as the peace of the "strong and rocky Gabilan Mountains", which gives us a sense of permanence and nature, and showing the peace that it has without humans intervening. This soon changes on the late afternoon of Sunday when the negative views are shown in chapter 6's dystopia: "...Slopes of the Gabilan Mountains and hilltops were rosy in the sun". The red sun is a symbol of war in many cultures, and in this case probably symbolises danger, and the Gabilan Mountains are much less described. ...read more.

D�nouement is also used in the novella to structure the action: There is rising action all way from the start until Lennie's death, and then the action falls to D�nouement, where most of the 'loose ends' are tied. Some people may call the story a tragedy, but tragedies are generally about the fall of a great man, but in Of Mice and Men, Lennie is just a simple man, which makes it subverted. Throughout the novella, there is a rollercoaster of affairs and emotions, especially with George who changes his moods constantly, from shouting at Lennie for having a dead mouse to complimenting him for his handiwork. The language used in Of Mice and Men is unique because Steinbeck has purposefully written in American Slang. He makes most of the people seem almost idiotic, but, for example, the people we meet in the bunkhouse are literate and enjoy magazines. Crooks is also very clever: he reads up on his law and rights by keeping his Californian Civil Code with him and also has a dictionary, both of which he seems to dislike. In summary, Of Mice and Men is heavily based upon Dreams and how they are crushed due to the varying factors involved in the novel, most noticeably the corrupt views toward people such as Lennie, Curley's Wife and Crooks, which affect many other people's dreams. ?? ?? ?? ?? Bryn Roberts 11L ...read more.