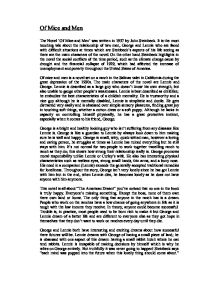 Of Mice and Men. This novel is all about The American Dream youve noticed that no one in the book is truly happy. Everyones missing something.

Of Mice and Men The Novel 'Of Mice and Men' was written in 1937 by John Steinbeck. It is the most touching tale about the relationship of two men, George and Lennie who are faced with difficult situations at times which are Steinbeck's aspects of his life seeing as there are the main characters of the novel. On the other hand Steinbeck highlights in the novel the social conflicts of the time period, such as the climate change cause by drought and the financial collapse of 1929, which had affected the increase of unemployment and poverty throughout the United States of America. Of mice and men is a novel set on a ranch in the Salinas valet in California during the great depression of the 1930s. The main characters of the novel are Lennie and George. Lennie is described as a large guy who doesn't know his own strength, but also unable to gauge other people's weaknesses. Lennie is best described as childlike; he embodies the best characteristics of a childish mentality. He is trustworthy and a nice guy although he is mentally disabled, Lennie is simplistic and docile. He gets distracted very easily and is obsessed over simple sensory pleasures, finding great joy in touching soft things, whether a cotton dress or a soft puppy. Although he lacks in capacity on controlling himself physically, he has a great protective instinct, especially when it comes to his friend, George. ...read more.

When George says "they got no family" this explains that they are like orphans who have nobody in life but themselves. This shows a sign of loneliness and isolation from others because all this time he hasn't really known the real meaning of life until he met Lennie. The men in the bunkhouse have nothing to look forward to except working on ranches for the rest of their lives. People like Slim and others find it strange how George and Lennie's relationship is really strong and how they travel together working as a team. This is because most of the ranch hands tend to travel alone. This also shows that having company is unusual and being lonely is now seen as normal for the people living on the ranches. Curley's wife is a young loving person who is fed up and wants some recognition, attention, her own identity and her own life. She is a very lonely character as she has nobody except her husband who she doesn't love and also doesn't receive love from him as well. Really she doesn't have her own identity as she is seen as just someone's wife, this is because Steinbeck has not given her an actual name by calling her "Curley's wife" to show us that she doesn't really have an identity. ...read more.

He is a little, mean and bitter bloke who is very aggressive and boastful to others. Rumours been said that Curley is a champion prize-fighter. Candy says that he is "handy" quoting that he fights well. He came in the finals for the Golden Glove boxing competition, this shows us that he likes fighting and is committed to it. No one likes Curley because he doesn't deserve the respect with how he treats people. He is a married man and his wife isn't very happy with him as she thinks that he has missed many opportunities to spend some time with her and bond together like couples do. The only time Curley shows up with his wife is when his wife was found dead. He doesn't realize the fact he needs to think about others then just himself. In Conclusion, Steinbeck has successfully presented all the characters to some degree of loneliness, which was the main theme. He has perfectly explained the different aspects of how their lives on the ranches can be very lonely even if you're still around each other. The way Steinbeck's style of writing makes you feel sympathy for the characters. Also you experience the people's lives were like at that time. The novel goes full circles, the situation ending basically the same as it began, at the same place. I really think the book "Of Mice and Men" is a really interesting story and have enjoyed it, I really recommend reading it! ...read more.