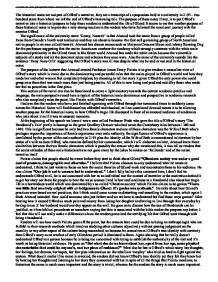 Offred's Narrative - What is the purpose and function of the 'Historical Notes' and how do they assist your interpretation of the novel?

What is the purpose and function of the 'Historical Notes' and how do they assist your interpretation of the novel? The historical notes are not part of Offred's narrative, they are a transcript of a symposium held at a university in 2195 - two hundred years from where we left the end of Offred's harrowing tale. The purpose of these notes if any, is to put Offred's narrative into a historical purpose to help these academics understand the life of Gilead. It seems to me that another purpose of these historical notes is to provoke a very strong reaction in the readers who have followed the emotional journey with the narrator Offred. The significance of the university name 'Denay, Nunavit' is that Atwood took the name from a group of people called Dene from Canada's North west territories and they are about to become the first self-governing group of North American native people in an area called Nunavit. Atwood has chosen names such as Maryann Crescent Moon and Johnny Running Dog for the professors suggesting that the native Americans overbear the academy which strongly contrasts with the white male-dominated patriarchy in the Gilead times in this future world Atwood has made the white males become the vulnerable subjects of a study and nit the dominant rulers and scholars they once were. ...read more.

saying that this is associated with the bible makes the purpose any better, I feel that this will not really make a difference to how the readers perceived the terrifying life that Offred went through with being a handmaid. Readers will see how much Pieixto goes off the point, but the reasons here could be due to being an anthropologist who are faithful to their research methods which involves studying other cultures objectively without passing judgement on the morality or any other aspect of the culture being researched, so because he cannot reveal Offred's true identity with certainty then Offred's story as an artefact of early Gileadean period is dismissed to them. Again showing that he really doesn't understand Offred as a person because he is being too concerned with trying to establish the authenticity of the text and it's worth as being historical evidence. He goes on "But what else do we know about her, apart from her age, some physical characteristics that could be anyone's, and her place of residence?" What else he has is Offred's whole story, her thoughts, her feelings, her dreams, her hopes, her fear plus information on the rebellion 'mayday' who tried so hard to fight against the system. ...read more.

Seeing how trivial a woman's life is but how glorifying a man's computer is suggests the patriarchal leanings of this new society, how they feel that Offred's trauma was really nothing to this group of academics again shows us that again that this society could not be far off who see themselves progressive but hold the seeds of patriarchal oppression. With Pieixto's appeal for some understanding feelings toward Gilead which was then followed by an applause this also suggests such moral ambivalence getting ready for such future evils. Another purpose for these notes is also to show how academics miss the point completely when looking at some historical facts and Atwood shows an example of this with these notes, how people can be sending out the wrong message and doing false teachings. The finishing sentence "Are there any questions?" gives the story a deliberate open-ended conclusion, here I think Atwood wants readers to discuss or at least think about the message she has just shown us, that the end of The Handmaids Tale is only the beginning of a discussion of the issues raised in the story, of what will our world finally become? ...read more.