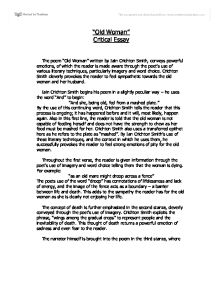 "Old Woman" Critical Essay The poem "Old Woman" written by Iain Crichton Smith, conveys powerful emotions, of which the reader is made aware through the poet's use of various literary techniques, particularly imagery and word choice. Crichton Smith cleverly provokes the reader to feel sympathetic towards the old woman and her husband. Iain Crichton Smith begins his poem in a slightly peculiar way - he uses the word "And" to begin: "And she, being old, fed from a mashed plate." By the use of this continuing word, Crichton Smith tells the reader that this process is ongoing; it has happened before and it will, most likely, happen again. Also in this first line, the reader is told that the old woman is not capable of feeding herself and does not have the strength to chew as her food must be mashed for her. ...read more.

Crichton Smith exploits the phrase, "wings among the gradual crops" to represent people and the inevitability of death. This thought of death returns a powerful emotion of sadness and even fear to the reader. The narrator himself is brought into the poem in the third stanza, where he refers to his own powerful emotions which reflect upon the reader. "There I sat, imprisoned in my pity and my shame." By his use of the word "imprisoned", Crichton Smith tells the reader that his movements and actions are restricted, provoking a strong emotion of rage. Also, referring to his pity and shame shows that he feels sorry for himself and the dying old woman. These powerful emotions are reflected upon the reader as they now feel sorry for the narrator in his despair and confusion. ...read more.

In the last line of the final stanza, the writer refers to the deaths of people as the many waves of the sea: "too many waves to mark two more or three." This is the writers way of telling the reader that there are so many deaths happening all over the world that it goes unnoticed to the rest of the world, and one person's death is almost counted as insignificant. This line also tells the reader about the inevitability of death and how there is absolutely nothing we can do to prevent it. Again, this brings back the readers mixed emotions of sadness and fear. In conclusion, I found the poem "Old Woman", by Iain Crichton Smith incredibly thought-provoking, and also quite emotionally disturbing. By Iain Crichton Smith's use of various literary techniques, he successfully creates a vivid image of the old woman's death, which effectively provokes the readers emotions. ?? ?? ?? ?? ...read more.