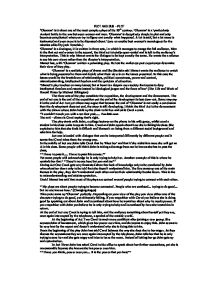 'Oleanna' is in short one of the most complex plays of the 20th century - plot and sub-plot.

PLOT AND SUB - PLOT 'Oleanna' is in short one of the most complex plays of the 20th century. 'Oleanna' is a 'particularly virulent battle in the war between women and men. 'Oleanna' is deceptively simple in plot and only becomes complicated when you try to figure out exactly what happened. A lot is said, but a lot more is insinuated and even more is to be discussed about.' (one on onethe best women's monologues for the nineties edited by jack Temchin.) 'Oleanna' is a duologue, it is written in three acts, in which it manages to enrage the full audience. Men in the first act and women in the second, the third act is totally open-ended and is left to the audience's interpretation. This is why Mamet wants the dialogue to be kept exactly the same. He wants the audience to see his own views rather than the director's interpretation. Mamet has, with 'Oleanna' written a polarising play. He lets the audiences past experiences determine their view of they play. 'Oleanna' is a realistic piece of drama and like Stanislavski Mamet wants the audience to watch what is being presented to them and decide what their view is on the issues presented. In this case the issues would be the breakdown of relationships, political correctness, power and control, misunderstanding, intellectual freedom and the cynicism of education. ...read more.

She accuses John of harassment, which gives her power over him, and she seems to enjoy this. John seems to be very hurt by the report and doesn't understand why she is doing this to him. From the beginning of the play John has said Carol behaves the way she does due to her anger. As they discuss the accusations they are once again interrupted by the telephone. John tells her that he is only trying to save her and she gets angry and tries to leave the room. Instead of letting her go John gets up and restrains her. In Act Three John has asked Carol to his office to speak about her further accusations, yet she is unreasonable because she knows she has power over him. ' "I have you think, power over you... It is the power that you hate"' She knows he hates his loss of power and plays on this by trying to bargain with him. She says that if he excludes his book from the University then she will drop the accusations. This seems to incriminate carol yet, at the same time makes her seem reasonable for not ruining his life, all she wants is understanding. ' " You think I want revenge. I don't want revenge. I WANT UNDERSTANDING"' At the end of the play Carol pushes John over the edge by telling him not to call his wife baby. ...read more.

(The life and work of Harold Pinter) 'Oleanna' is, in some ways a comedy of errors and although it is not funny it can be almost farcical depending on how you view the play. If you feel that John is saying one thing and Carol takes this in a completely different context then the play becomes almost farcical. 'Oleanna' is a microcosm for the whole world, what we see when watching 'Oleanna' happens everywhere, it is just another misunderstanding. It is also a microcosm about claustrophobia. The feeling of claustrophobia John has in his life is the same as what everyone else will feel in their own lives sometimes. What makes 'Oleanna' so different as a play is that although Mamet is prescriptive so the director may follow some of Stanislavski's system to access realism he perhaps wouldn't use emotion memory 'There are no characters only lines on a page' (changing stages) Because it will change the audience's perception of the play, you cannot play the character with your own emotion you have to BE the character. Another thing, which makes the play so endearing, is that we don't actually know the characters intentions. This means that the smallest thing can change the audience's perception. Another thing is that in the 20th century when Brecht wrote his list of differences between dramatic theatre and epic theatre he said that dramatic theatre has a beginning, middle and end whereas epic doesn't, this is not the case with 'Oleanna' which doesn't have a specific beginning or end, also we are not sure if the issues brought forward are resolved. ...read more.