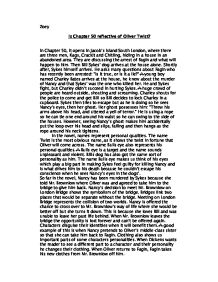 Zoey Is Chapter 50 reflective of Oliver Twist? In Chapter 50, it opens in Jacob's Island South London, where there are three men, Kags, Crackit and Chitling, hiding in a house in an abandoned area. They are discussing the arrest of Fagin and what will happen to him. Then Bill Sykes' dog arrives at the house alone. Shortly after, Sykes himself arrives. He asks many questions about Fagin who has recently been arrested: "Is it true, or is it a lie?" A young boy named Charley Bates arrives at the house, he knew about the murder of Nancy and that Sykes' was the one who killed her. He and Sykes fight, but Charley didn't succeed in hurting Sykes. A huge crowd of people are heard outside, shouting and screaming. Charley shouts for the police to come and get Bill so Bill decides to lock Charley in a cupboard. Sykes then tries to escape but as he is doing so he sees Nancy's eyes, then her ghost. Her ghost possesses him: "Threw his arms above his head, and uttered a yell of terror." He is using a rope so he can tie one end around his waist so he can swing to the side of the houses. ...read more.

By looking at the characters' fates we can assume that the answer is they do not. Especially characters like Fagin and Sykes seem to have permanent damage to their moral sensibilities. Even Sykes has a conscience which appears when Bill sees Nancy's eyes that haunts him after the murder. Oliver is above the corruption though the novel takes him away from poor and nasty environments quite early in his life. Nancy, who considers herself, "lost almost beyond redemption", ends up sacrificing everything for a child she barely knows. Dickens doesn't believe an environment can affect your personality; a bad place can't affect your good personality. He shows this by using Oliver as an example. The chapter is set on the banks of the River Thames, the black river. The buildings surrounding the river are dirty and close built to one another. There are a lot of dirty, muddy streets. Shops sell a lot of cheap goods. They have their junk hanging outside to entice people in. Everything looks the same, like a maze. There is no air. The whole place is rotting and full of garbage. The windows in the houses have no glass and the doors are falling off: "Rooms so small, so filthy, so confined, that the air would seem too tainted, even for the dirt..." ...read more.

We feel disgust when we hear of people living in these terrible conditions. We are tense when Bill arrives at the house as we don't know what he will do and we know what he is capable of. We feel relief when the police arrive but are tense when Bill is on the roof. We are afraid when Bill sees Nancy's ghost and we have mixed feelings when Bill dies. We are appalled when Bill hits Nancy because he shouldn't harm her just because she upsets him. When Bill kidnaps Oliver we feel panic because Oliver was happy with Mr. Brownlow and, again, we don't know what Bill will do. When Nancy agrees to meet Mr. Brownlow on the bridge because we know that Bill will catch them. We panic when Bill finds out that Nancy spoke to Mr. Brownlow and we know just how dangerous he is. Chapter 50 is like the rest of the novel because the things that have happened in this chapter are the same as the others. We have the same characters and the same place, both described in the same way. We also go through the same emotions as a reader, and the language used in this chapter, can be found in the rest of the novel. ...read more.