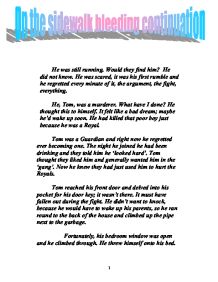 On the sidewalk bleeding continuation

He was still running. Would they find him? He did not know. He was scared, it was his first rumble and he regretted every minute of it, the argument, the fight, everything. He, Tom, was a murderer. What have I done? He thought this to himself. It felt like a bad dream; maybe he'd wake up soon. He had killed that poor boy just because he was a Royal. Tom was a Guardian and right now he regretted ever becoming one. The night he joined he had been drinking and they told him he 'looked hard'. Tom thought they liked him and generally wanted him in the 'gang'. Now he knew they had just used him to hurt the Royals. ...read more.

He wanted to turn back the clock. He wanted to be with Angela, but Angela was with Freddie and Tom was no match for Freddie. Freddie was tough and could probably kill Tom if he tried, Freddie cared for Angela more than anything else, therefore he wouldn't even be able to go near Angela while Freddie was with her, which was all the time. Nearly. Tom picked up the remote from the floor and switched on the television The news was on. As ever. " Poor Andy Bolton has been found lying in an alleyway dead. If there is anyone out there who witnessed Andy's death, please call 01342 225 225, we would be grateful for any help." He switched off the television and threw the remote on the floor. ...read more.

Tom stopped outside a caf�; the news was on- again- there had been a witness who had phoned in, describing a young boy of around 16 wearing a black hooded jacket and tie-dye jeans, the exact description of Tom. They were going to find him, someone had seen. He was so afraid. He had to leave. Tom ran and ran until he reached Rush Mont Creek, the tallest cliff in the area. He leaned over the edge and looked down, there was a 70-foot drop. His mind and brain wasn't giving him any help and he didn't know whether to jump or not. He didn't think anyone would miss him. I have too many troubles, Tom thought to himself. He didn't want troubles and problems. Maybe he would be happier dead. Goodbye, Tom shouted out to whoever was listening probably no one "I'm so sorry", and he jumped. By Kathryn Snowden 9:01 1 ...read more.

The writing in this piece tends to abide by the rules of the English Language and in this way it would gain some marks; however as a piece of creative writing it is not interesting or imaginative enough. The focus is too much on the plot and not enough on the development of a piece of writing people would enjoy reading because of the levels of description and imagery created.