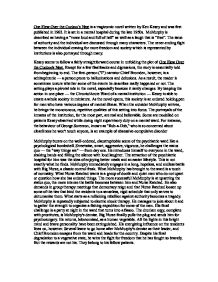 One Flew Over the Cukoo's Nest Essay 1

One Flew Over the Cuckoo's Nest is a tragicomic novel written by Ken Kesey and was first published in 1962. It is set in a mental hospital during the late 1950s. McMurphy is described as having a "voice loud and full of hell" as well as a laugh that is "free". The issue of authority and the individual are discussed through many characters. The never-ending fight between the individual craving for more freedom and society which is represented by institutions is also portrayed through many. Kesey seems to follow a fairly straightforward course in unfolding the plot of One Flew Over the Cuckoo's Nest. Except for a few flashbacks and digressions, the story is essentially told from beginning to end. The first-person ("I") narrator Chief Bromden, however, is a schizophrenic - a person prone to hallucinations and delusions. As a result, the reader is sometimes unsure whether some of the events he describes really happened or not. The setting plays a pivotal role in the novel, especially because it rarely changes. By keeping the action in one place - the Chronic/Acute Ward of a mental institution - Kesey is able to create a whole society in miniature. ...read more.

He manages to joke about it and to gather the strength to organize a fishing expedition for some of the men. His final challenge is a party at night in the ward that turns into a fiasco. The drunken orgy, complete with prostitutes, is McMurphy's demise. Big Nurse finally pulls the plug and sends him for psychosurgery. He returns, lobotomized, as a human vegetable. All the lights in this bright mind and brave personality have been extinguished. His energizing influence on the residents lives on, however. Several leave to go home after McMurphy's demise as their leader, and Chief Bromden escapes from the ward and heads for the country. Despite his final degradation to a vegetative state, he wins the fight for freedom that he has fought so bravely. But the rewards are not his. They belong to his fellow patients. The main action of One Flew Over the Cuckoo's Nest consists of McMurphy's struggles against the strict rules of Big Nurse Ratched. Her ward at the hospital is a society in itself, for it has its own laws and punishments, both for the inmates and for the orderlies and nurses who watch over them. ...read more.

These are referred to as 'misfits' being processed by the machine. The control panel is a machine that is symbolic of courage, confidence and determination to fight society's control. McMurphy TRIED using the control panel as a method of escaping. Even though he failed he had at least tried, whereas the other patients are too frightened to do anything of the sort or an action that would get The Big Nurse outraged. On the other hand to dehumanising symbol; there is the laughter that humanises the patients, it is spontaneous. McMurphy's laughter is the first thing that Chief notices as it reminds him of another individual who fought against society, his father. The fishing trip which was full of spontaneous laughter, was a way for the patients to become human. They forgot the paranoia, the fear created by the machines and The Big Nurse. McMurphy's hand is also something that seems human in the novel. The hand reflects his character and the broad range of life experience and his strength. When he arrives he seems out of place, a human in a world of robots, he is compassionate and generous. But even though his hand may seem innocent, it his hands that later de-humanises and becomes a weapon against the nurse. ...read more.