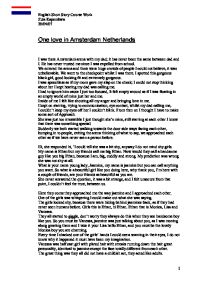 One love in Amsterdam Netherlands

One love in Amsterdam Netherlands I was there Amsterdam arena with my dad; it has never been the same between dad and I. He has never trusted me since I was expelled from school. We entered the arena and there were huge crowds of people I could not believe, it was unbelievable. We went to the checkpoint whilst I was there. I spotted this gorgeous black girl, good looking fit and extremely gorgeous. I was speechless as if my mom gave my slap on the cheek; I could not stop thinking about her I kept hearing my dad was calling me. I had to ignore him cause I just too focused, It felt empty around as if I was floating in an empty world of mine just her and me. Inside of me I felt like shouting all my anger and bringing love in me. I kept on starring, trying to communication, eye contact, whilst my dad calling me, I couldn't keep my eyes off her I couldn't blink. From then on I thought I have to make some sort of Approach. She was just too irresistible I just thought she's mine, still starring at each other I knew that there was something special. Suddenly we both started walking towards the door side ways facing each other, bumping in to people, exiting the arena thinking of what to say, we approached each other as if we have never seen a person before. Hi, she responded hi, `I could tell she was a bit shy, anyway I do not mind shy girls. My name is Ethan but my friends call me big Ethan. Now would they call a handsome guy like you big Ethan, because I am, big, cuddly and strong. My prediction was wrong she was not shy at all. What is your name young lady, Jasmine, my name is jasmine but you can call anything you want. ...read more.

That my option, I don't mind because it's not me getting married early, I am your best friend, it is only me to advise you but at the end of the day it is your choice if you want to do it or not. However, I could feel that Jesse felt the same that I did but to Vanessa, for some reason I felt he was lying to me. Every time I asked him a question, when answering the questions he kept on turning his head around as if he could sense some behind him. Suddenly when Jesse and I were speaking we both her a noise, coming from all directions, as If cars had surrounded us with the engine running. Jesse and I could not make out what it was, Jesse and I stood up whilst squinting trying to see what it was looking lost as if we were in the jungle trying to find our way home. Whilst everybody wondering what was going on, Then all I could remember was Jesse warning watch out motor bike cruising threw the beach as if it was a dirt track. And Jesse laying on the silky sand on the lake, trying to help, I took him in my hands, as if was carrying a baby lost in the wilderness trying to keep him safe. Holding him, Michael came and checks his pulse as if he were a paramedic, Michael said there was no hope he was dead, not breathing. Holding him did not give up. I knew he would not die without a fight. I have never lost faith in him and I will not lose faith in him now. I sat there in agony repeatedly shouting this cannot be happening tears dripping like heavy rain tears of faith. This cannot be happening to me why I ask myself too many questions, he is like a brother to me, please forgive me I beg you, he risked he's life for mine. ...read more.

She saw that I had shed a tear, she took her hand, and wiped the tear off my cheeks sensitively with her right hand running my down that smooth sensitive face of mine. We stood there looking at each other all I wanted her, to do is rest on my shoulder, and be free with me, because this could be the last time we see each other. It seemed not to happen. I took Jasmines, hand and continued our journey back, as we reached the end of the bridge, there as we left the bridge was a park with scenic beauty though it dark. . While Jasmine and I were walking together, I saw Jesse and Vanessa, Michael and Monica had probably reached Jesse's house by now. Nevertheless, Lisa always seemed to disappear, always the quiet one, since I saw her I was never able to understand her., anyway she probably went home. Jesse and Vanessa were sat on the bench, in the park facing each other holding hands suffixed, as if it was a replay of jasmine and I when we were on the bridge together, madly in love with each other except with a different scenario. I did not realise how much they fancied each other, when Jesse and I spoke I did not know that he was staid about their relationship, perhaps its time for me to take him more seriously. I guess I should let Jesse have some space to himself because I have always be protective over him, as I said before he is like the brother I never had. Jasmine and I attempted to walk past them ignoring, them as if nothing happened. They immediately acted as if everything was normal, Jesse looking at me as if I was a fool, swinging his head, to the right, wanting to speak to me in private while Vanessa and jasmine also walked ahead have their own jest. "So Jesse what was all that about." "What are you talking about," while strolling in the silent night of the park. ...read more.