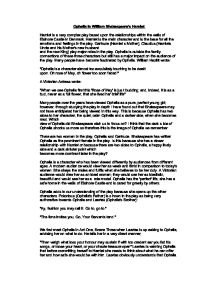 Ophelia in William Shakespeare's Hamlet Hamlet is a very complex play based upon the relationships within the walls of Elsinore Castle in Denmark. Hamlet is the main character and is the base for all the emotions and feelings in the play. Gertrude (Hamlets Mother), Claudius (Hamlets Uncle and his Mother's new husband and the new King) play major roles in the play. Ophelia is outside the family connections of these three characters but still has a major impact on the audience of the play. Many people have become fascinated by Ophelia. William Hazlitt wrote: "Ophelia is a character almost too exquisitely touching to be dwelt upon. Oh rose of May, oh flower too soon faded!" A Victorian Actress wrote: "When we see Ophelia first this 'Rose of May' is just budding; and, indeed, it is as a bud, never as a full flower, that she lived her brief life" Many people over the years have viewed Ophelia as a pure, perfect young girl, however, through studying the play in depth I have found out that Shakespeare may not have anticipated her being viewed in this way. This is because Ophelia has two sides to her character, the quiet, calm Ophelia and a darker side, when she becomes mad. Which view of Ophelia did Shakespeare wish us to focus on? I think that the dark side of Ophelia shocks us more so therefore this is the image of Ophelia we remember. There are two women in the play, Ophelia and Gertrude. Shakespeare has written Ophelia as the prominent female in the play. ...read more.

In this scene we are also told that Ophelia is going to be used as 'bait' to find out the cause of Hamlets madness. This tells us that Gertrude, Claudius and Polonious know that Hamlet can trust Ophelia with his secrets and will confide in her. This tells us that Hamlet and Ophelia have a very close relationship. Shakespeare has chosen to use Ophelia as the character that Hamlet confides in because she is innocent and whatever Hamlet tells her she will believe. Because of the way Ophelia has been brought up she has learnt not to challenge men whatever the circumstances. If Gertrude had played this role we might not have found out the whole truth about Hamlet madness. The fact that Ophelia has been used tells us that Gertrude questions Hamlets honesty when talking to her. If she felt he was fully honest with her she would have offered to talk to Hamlet herself. Later in this scene is a very important dialogue between Hamlet and Ophelia. Ophelia says to Hamlet that she has some letters that he has sent her. Hamlet denies sending the letters. He then advises Ophelia to take herself to a nunnery. Shakespeare has created this scene to make Ophelia look more innocent. "Get thee to a nunnery" (Hamlet) Shakespeare is making Ophelia into a stereotypical, innocent, sweet lady through Hamlet assuming that she needs protecting. Ophelia has once again opened up another character so that we can see a different side to them. Without Ophelia in the play would we see this protective side of Hamlet? ...read more.

All the way through the play Ophelia has been a calm, quiet character who didn't speak up very often. Her death reflects her attitude towards life; she was very passive and liked to feel she brought a feeling of peace to Elsinore Castle. The last scene Ophelia is connected with, is her funeral. Hamlet arrives back to Elsinore Castle in time for the funeral. He is shocked by the news of Ophelia's death. Hamlet then expresses his love for Ophelia "I loved Ophelia; forty thousand brothers could not with all their quantity of love, make up my sum. What wilt thou do for her?" Shakespeare has shown Ophelia's funeral because throughout the play the audience has become more and more connected to her. It is a way of making them feel part of the play, and feeling the same emotions as the characters. After reading the play of Hamlet I can see that although Ophelia doesn't play a major role in the story of the play she adds great depth to the dramatic effects. Through her love for Hamlet she adds emotion to the play. Her contrast of character to the other characters means that the audience will single her out as being different and feel more involved in the play through Ophelia. Because Ophelia is so innocent other characters use her in different ways. Polonious uses her to display his real character to the audience. Ophelia helps the audience see that Polonious interferes with everyone else's business. Through her love she shows a caring and loving side of Hamlet but also Shows Hamlet as being aggressive and dismissive. Ophelia's character helps to make the play of Hamlet realistic, emotional, dramatic and adds a contrast to the play. ...read more.