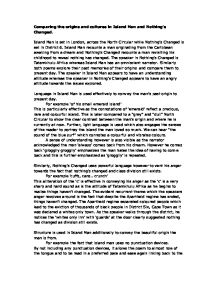 However he comes back 'groggily groggily' emphasizes the man hates the idea of having to come back and this is further emphasized as 'groggily' is repeated. Similarly, Nothing's Changed uses powerful language however to vent his anger towards the fact that nothing's changed and class division still exists. For example 'cuffs, cans.. crunch' This alliteration of the 'c' is effective in conveying his anger as the 'c' is a very sharp and hard sound as is the attitude of Tatamkhulu Afrika as he begins to realise things haven't changed. The evident recurrent theme which the speakers anger revolves around is the fact that despite the Apartheid regime has ended, things haven't changed. ...read more.

Structure in Nothing's Changed further connotes the fact that the origin hasn't changed and probably wont change. For example the poem both begins with and ends with Nothing's Changed. Following the idea that the most memorable parts of texts are both the beginnings and endings, the speakers idea that nothing's changed is clearly put forward as it is repeated both at the beginning and end. Concluding, both poems convey their origins effectively where island man shows a clear contrast whereas Nothing's changed explores the fact that the situation in District Six still remains. Despite both poems being very effective as they clearly convey their feelings strongly, Island Man appears more effective as the reader can see a clear divide represented by both the strong language and the structure. ...read more.