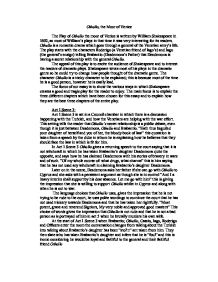 Othello, the Moor of Venice

The Play of Othello the moor of Venice is written by William Shakespeare in 1602, as most of William’s plays in that time it was very interesting for its readers. Othello is a romantic drama which goes through a general of the Venetian army’s life. The play starts with the characters Roderigo (a Venetian friend of Iago’s) and Iago (the general’s ensign) telling Brabantio (Desdemona’s Father) that Desdemona is having a secret relationship with the general Othello.

The appeal of this play is to excite the audience of Shakespeare and to interest the readers of dramatic plays. Shakespeare wrote most of his plays in the dramatic genre so he could try to change how people thought of the dramatic genre. The character Othello is a tricky character to be explained; this is because most of the time he is a good person, however he is easily lead.

The focus of our essay is to show the various ways in which Shakespeare creates a good and tragic play for the reader to enjoy. The main focus is to explain the three different chapters which have been chosen for this essay and to explain how they are the best three chapters of the entire play.

Act 1 Scene 3 is set in a Council chamber in which there is a discussion happening with the Turkish, and how the Venetians are helping with the war effort. This setting tells the reader that Othello’s secret relationship is a public debate, even though it is just between Desdemona, Othello and Brabantio. “Hath thus beguiled your daughter of herself and you of her, the bloody book of law” this quotation is taken from a speech by the duke in whom he is explaining how he believes that they should face the law in which is fit for him.

In Act 1 Scene 3 Othello gives a returning speech to the court saying that it is not witchcraft in which he has taken Brabantio’s daughter Desdemona quite the opposite, and says how he has claimed Desdemona with his stories of bravery in wars and of such. “Of my whole course of: what drugs, what charms” this is him saying that he has not used any witchcraft in claiming Brabantio’s daughter Desdemona.

Later on in the scene, Desdemona asks her father if she can go with Othello to Cyprus and she asks with a persistent argument as though she is in control “And I a heavy interim shall support by his dear absence. Let me go with him” this is giving the impression that she is willing to support Othello whilst in Cyprus and along with when he is out to war.

The language choices that Othello uses, gives the impression that he is not trying to be rude to the court, he uses polite wordings to convince the court that he has not used trickery towards Desdemona and that he has taken her rightfully. “Most potent, grave and reverend Signiors, My very noble and approved good masters” This choice of words gives the impression that Othello is not rude and that he is not a bad person as is portrayed of him in act 5 when he brutally murders his own wife.

At the start of Act 1 Scene 3 when Brabantio; Othello, Cassio, Iago, Roderigo and Officers enter the room the conversation changes from talking about the Turkish into talking about Brabantio’s daughter has been “stol’n” ant taken from him. They then slate who has taken Brabantio’s daughter and infers that he is “foul” and this is ironic considering he would be loyal and faithful to the general and their faithful friend Othello

As we know during the end of the play Othello that Othello eventually believes Iago over his own wife, in this scene Othello’s wife Desdemona seems to easily persuade Othello to give Cassio a second chance and give him a personal greeting again. “Prithee, no more. Let him come when he will, I will deny thee nothing.”  This shows that Othello is easily persuaded into doing a thing that he wouldn’t normally do and that is what Othello comes to when he believes Iago over Desdemona, this gives an earlier insight to the ease that Othello is talked over to a different side of an argument.

This chapter contains Dramatic Irony due to the speech which is given near the end of the scene when Iago is talking Othello into believing him “Nay, yet be wise, yet we see nothing done, She may be honest yet.” This shows that instead of being direct with his incorrect point, he drops it into the conversation when Othello is starting to believe Iago’s prophecy then when Iago says what is in the quote above he then drops in a point to argue for Desdemona cheating “Tell me but this, Have you not sometimes seen a handkerchief Spotted with strawberries in your wife’s hand?” this shows to the audience how well planned out Iago’s plot it.

Othello is told by Iago of how Iago had a ‘dream’ of how Desdemona and Cassio were having an affair with each other “in sleep I heard him say “Sweet Desdemona, Let us be wary, let us hide our loves.” This shows of Iago’s persuasive techniques to get Othello to believe him, Othello also takes this as a bad omen and believes that becauseIago has dreamt this that it may already be happening, as the quote will explain “But this denoted a foregone conclusion.”

Othello’s hamartia (tragic downfall) is the fact that he is too trusting of his source, I believe that Othello is a good person at heart however like is mentioned above he is too trustworthy when it comes to his peers for instance Iago

'Tis a shrewd doubt, though it be but a dream. And this may help to thicken other proofs That do demonstrate thinly.”

“I’ll tear her all to pieces!”

At the start of scene 3 of act 3, Othello is entirely trusting within his wife and yet his peer Iago manages to talk Othello over to his own way of thinking, that is Othello’s Hamartia