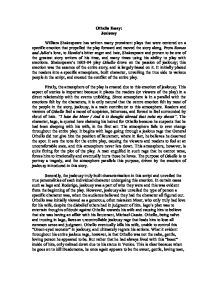 Othello Essay: Jealousy William Shakespeare has written many prominent plays that were centered on a specific emotion that propelled the play forward and moved the story along. From Romeo and Juliet's love, to Hamlet's bitter anger and hate, Shakespeare and proven to be one of the greatest story writers of his time, and many times using his ability to play with emotions. Shakespeare's 1603-04 play Othello drove on the passion of jealousy; this emotion was the essence of the entire story, and is largely based on it. It initially placed the readers into a specific atmosphere, built character, unveiling the true side to various people in the script, and created the conflict of the entire play. Firstly, the atmosphere of the play is created due to this emotion of jealousy. This aspect of stories is important because it places the readers (or viewers of the play) in a direct relationship with the events unfolding. ...read more.

However, jealousy also unveiled the type of person a specific character was, when the audience believed they had the character all figured out. Othello was initially viewed as a generous, often mistaken Moor, who only truly had love for his wife, despite the disbelief others had in judgment of him. Iago's plan was to entertain thoughts of doubt against Othello towards his wife and causing him to believe that she was having an affair with his lieutenant, Michael Cassio. Othello, being na�ve and trusting in Iago, faces an uncontrollable jealousy rage that leads him to lose all common sense and judgment. Othello eventually kills his wife, unable to control this "Green-eyed monster" in jealousy, and ultimately regrets his actions. What it evident throughout his entire jealous rage, however, is that Othello was not the calm, gentle, loving person he appeared to be. But rather that he had always lived with this "beast" inside of him, only calmed down due to his status in Venice. ...read more.

In the final act, the first scene, due to Iago's twisted plans, Roderigo goes ahead and fights Cassio. As both of them fall, Iago takes advantage of this situation and kills Roderigo to make it appear as if he was murdered for the purpose to silence him. His plan fell through perfectly, in which the purpose was to act on his hatred for Michael Cassio. It is evident that jealousy even brought about conflict to minor characters, such as Roderigo, whom the audience does not learn too much about. Other than this, jealousy creates other conflicts such as Othello fighting with himself and trying to contain his jealousy, Othello with Desdemona, and Iago against Othello. Overall, it is evident that in the play of Othello, jealousy is a vital element that William Shakespeare uses to propel the play and move it along forward. Single-handedly, it creates the atmosphere, characterization, conflict, and therefore, action and different situations. To a large extent, this play depends on this emotion to move the story along and create the situations that this story plays off of to make a widely successful tragedy. ...read more.