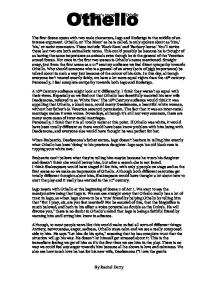 The first Scene opens with two male characters, Iago and Roderigo in the middle of an intense argument. Othello, or 'The Moor' as he is called, is only spoken about as 'him,' 'his,' or racist comments. These include 'Black Ram' and 'Barbary horse.' You'll notice these last two are both animalistic terms. This could possibly be because he is thought of as having the same importance as animals even though he is the general of the Venetian armed forces. Not once in the first two scenes is Othello's name mentioned. Straight away, just from the first scene as a 21st century audience we feel direct sympathy towards Othello. Why should someone who is a general of an army (so is of high importance) be talked about in such a way just because of the colour of his skin. In this day, although everyone isn't treated exactly fairly, we have a lot more equal rights than the 16th century. Personally, I feel complete antipathy towards both Iago and Roderigo. A 16th Century audience might look at it differently. I think they weren't so equal with their views. Especially as we find out that Othello has deceitfully married his new wife Desdemona, referred to as 'White Yew.' The 16th Century audience would think it was appalling that Othello, a black man, could marry Desdemona, a beautiful white woman, without her father's (a Venetian senator) permission. The fact that it was an inter-racial marriage makes it even worse. Nowadays, although it's still not very common, there are many more cases of inter-racial marriages. Personally, I think that it is all totally racist at this point. If Othello was white, it would have been totally different as there would have been know problem with him being with Desdemona, and everyone else would have thought he was perfect for her. When Brabantio, Desdemona's father enters, Iago doesn't hesitate in telling him exactly what Othello has been 'doing' to his precious daughter. ...read more.

The 16th Century audience will be starting to believe Othello now, because they could have agreed that Othello had been using 'charms' and 'witchcraft' but hearing Desdemona speak will have changed their views. Othello shows his trust and friendship with Iago as he asks him to come to Cyprus and look after Desdemona 'Honest Iago, My Desdemona must I leave to thee.' This is ironic, as Othello chooses to use the word honest, when this is the last thing Iago is. When Othello arrives, triumphant with his victory, he takes no hesitation in emphasizing his love for Desdemona again - 'It gives me wonder great as my content to see you here before me. O, my soul's joy!' They share a kiss in front of everyone in the room. A 21st century audience will feel as though Othello is being really loving and romantic and that there's nothing wrong with showing his love to his wife. A 16th century audience would probably be split two ways. Half would think that Othello is obviously just a loving, noble man and it doesn't matter that he's black. The other half, however, would think that Othello needs to stop being so outward with his love for Desdemona as he is black and is a 'deceiver.' Throughout the rest of act two, we can still see the trust Othello has in Iago. He says 'Iago is most honest.' We feel so sorry for Othello that it is such a "one-sided" friendship. Near the end of Act 2, we see Iago talking to Cassio. Iago is acting like a friendly, helpful, honest man and yet he has cunning schemes. He persuades Cassio to go and talk to Desdemona and Cassio is sucked in straight away - 'You advise me well.' What is going to happen if Cassio goes and talks to Desdemona? Will it cause any problems for Othello? ...read more.

I think that the audiences will be shocked that Othello's planning on killing Desdemona, even though earlier on in the play, he talked about how she was so important to him and he can't imagine not loving her. Desdemona tries her hardest to explain that she has done nothing to offend him - 'I never did offend you in my life; never loved Cassio.' Othello believes nothing she says though, and smothers her until she dies. He believes he is doing the right thing as he truly thinks she has committed adultery (which was considered really bad in Shakespearian times.) When Emilia comes in, she takes no time in telling him 'foul murder done.' Othello still believes that everything Iago said was true and still thinks he is 'honest, honest Iago.' However, a few minutes later, he realizes Iago was a fake and fraud and takes no hesitation in wounding him. Othello explains to all how his was led falsely into believing Desdemona was cheating on him and how he killed her so she could keep her honour - 'Why, anything: An honorable murderer, if you will: For naught I did in hate, but all in honour' He will always have his honour as well. He stabs himself and dies next to his dead wife, Desdemona. I think the 21st Century Audience will understand how he was mislead and tricked into believing a pack of lies. They might even be able to understand why he killed Desdemona and then himself. The 16th Century audience will probably have no understanding or sympathy towards Othello after everything that he did. Both audiences throughout will have had different perspectives of what was happening and different feelings towards Othello's character. This is understandable as morals and thoughts on certain things were different 500 years ago to how it is now. The play brought out lots of emotions in the audience and there were many similarities as well in how the audiences will have felt. It was well written and I've thoroughly enjoyed studying Othello! An audience's response to Othello By Rachel Derry ...read more.